SEOUL, July 31 (Yonhap) -- Civic groups have petitioned the Constitutional Court to declare that the government's massive collection of mobile phone data for contact tracing to stem the spread of COVID-19 was unconstitutional.

The five groups led by two influential civic groups -- MINBYUN-Lawyers for a Democracy Society and People's Solidarity for Participatory Democracy -- claimed on Wednesday that it was a violation of people's freedom and thus "unconstitutional" that the authorities in May extensively collected and used cell phone signals to find visitors to the Itaewon area in an effort to stop the novel coronavirus from spreading in communities.

The popular nightlife district was a virus hotspot in May and June, with a total of 189 cases linked to its nightclubs and bars.

The groups, representing a plaintiff who asked not to identified and whose gender was also withdrawn, said in a statement on Thursday that the person received a text message from the Seoul city government on May 18 saying to get tested for the virus.

The plaintiff visited a restaurant in the area in late April located far away from the nightclubs that a COVID-19 patient used in the early hours of May 2.

Believing it was an unfair practice, the plaintiff asked the authorities on what legal grounds they were gathering sensitive personal data without consent, but the person allegedly heard only equivocal answers from them that just referred to the loosely worded law on infectious disease prevention.

The groups, citing news reports, argued that personal information of 10,905 people was collected by the authorities in such a manner to cope with the Itaewon cluster outbreaks.

"It is illegitimate to extensively collect personal information of some 10,000 visitors just because an infection broke out in the Itaewon area," they said in a statement, adding that the wording in the relevant law about people suspected of coming in contact with an infected person is also too broad.

Seoul city requested that the country's three big telecom companies turn in information about cell phone users who stayed in the area for more than 30 minutes anytime between midnight and 5 a.m. from April 24 to May 6. The received information contained names, phone numbers and addresses.

The authorities, assuming the visitors might carry the virus, lacked reasonable legal grounds to use their location data to amass private information, the groups argued.

"Unless collecting location data is proved to help effectively prevent an infectious disease," the practice used in the Itaewon cluster case is believed to be too "extensive" and inappropriate and in violation of human rights guaranteed by the Constitution, they said. 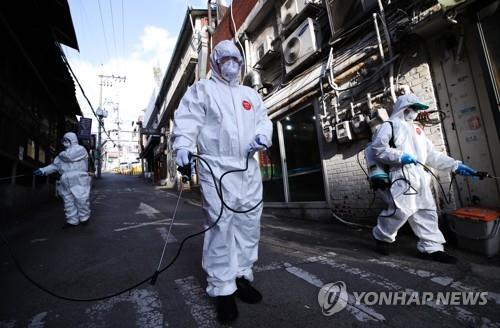