SEOUL, Aug. 2 (Yonhap) -- South Korea and Iran have agreed to launch a working group on expanding humanitarian trade as part of efforts to maintain bilateral partnership within the scope of a U.S.-approved sanctions exemption, a source close to the matter said Sunday.

The director general-level consultation aims to discuss on a regular basis how to match Iran's demand for medicine and medical equipment with what South Korean exporters can offer, the source said.

The first working group talks will likely be held early next month.

The two sides reached the agreement during their higher-level virtual talks held earlier this week. In the talks, the Iranian side expressed intent to purchase several hundred millions of dollars worth of South Korean products, according to the source.

South Korea has been seeking to expand humanitarian exports to Iran, including coronavirus test kits, amid the worsening COVID-19 outbreak there, as well as other essential medicine, like flu vaccines and antidiabetics.

Expanding humanitarian trade with Tehran is also expected to help the two countries settle the issue of Iran's assets -- known to be worth up to US$7 billion -- frozen in two Korean bank accounts since last year due to Washington's tightened sanctions against Tehran.

The two countries had used the won currency-based accounts to continue Korea's oil imports from Iran and exports of goods to Iran upon the U.S. waiver of sanctions limiting dollar-based financial transactions with Tehran. But Washington refused to extend the sanctions waiver.

In April, Washington approved a special license for Seoul to resume some humanitarian transactions with Tehran even if they involve Iran's central bank subject to U.S. sanctions. In late May, Seoul sent to Tehran $500,000 worth of medicine for hereditary diseases in the first such shipment to the Middle Eastern country.

The Seoul government has also launched an interagency task force to step up humanitarian trade with Iran and hosted a series of briefing sessions for local companies to help them resume trade with Tehran. 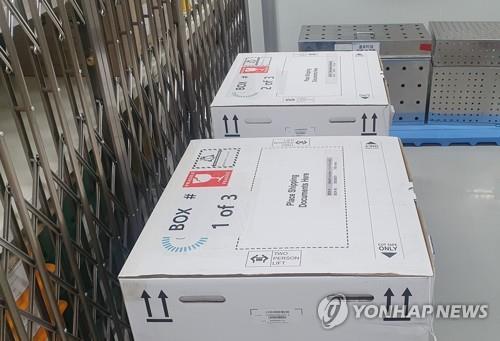