"I'll actively look for ways to restart the Mount Kumgang tour project," he said while visiting Jejin Station in Goseong, northeast of Seoul, near the Demilitarized Zone that separates two Koreas. "The resumption of the tour program will send a message of peace on the Korean Peninsula and revive the economy of border regions."

The minister also said he will go ahead with plans to reconnect the rail network to North Korea in a bid to create a new economic order on the Korean Peninsula.

During his confirmation hearing earlier this month, Lee said he would look for a "creative solution" to restart the tour program to North Korea's scenic mountains in the form of individual tours as a way to improve inter-Korean relations without violating international sanctions imposed on Pyongyang.

Started in 2003, the project was suspended after a South Korean tourist was shot dead near the mountain resort in 2008. The program's formal resumption requires a sanctions waiver, as it involves bulk cash transfer to the North. 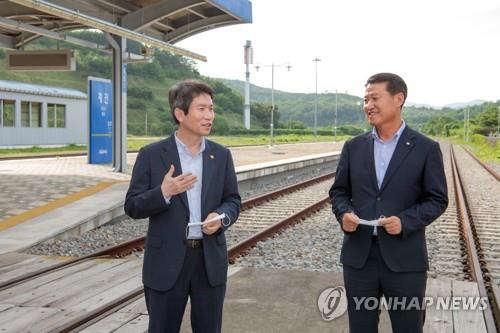