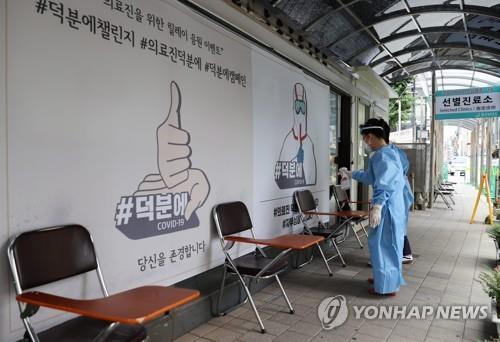 As of noon on Sunday, nine new cases have been confirmed at a coffee shop and a restaurant, both of them located in southern Seoul, since the first infection was reported in the former place earlier last week.

Health officials said that a person who visited the coffee shop appears to have spread the virus to the restaurant. They are not sure where the first patient had contracted the disease.

The KCD said South Korea's fatality rate of people infected with the virus was 2.1 percent. The rate was 24.92 percent for those aged 80 and above.

The government said the number of daily infection cases has been on the decline in recent weeks, though cluster infections are being reported sporadically in Seoul and its surrounding area.

According to health officials, daily infections averaged at 16.9 from July 19 to Saturday, lower than the 21.4 tallied during the previous two-week period. They also said community infections in provincial areas have been "markedly" subsiding.

The government still urged people to stay on high alert, saying that handling possible infections during the peak summer vacation season would serve as a "watershed" in the fight against COVID-19. It advised people to stay home or avoid crowded places if they go on vacation.