SEOUL, Aug. 2 (Yonhap) -- Creditors of Asiana Airlines Inc. are considering making a counterproposal to sharply cut the period of another round of due diligence on the debt-laden carrier, an official of the creditors said Sunday.

The move came more than a week after HDC Hyundai Development Co., a major property developer, demanded additional due diligence on Asiana Airlines for 12 weeks beginning in mid-August.

HDC has claimed it will be forced to shoulder Asiana's heavy debts if it acquires the airline without looking into its current financial condition hit hard by the coronavirus pandemic. 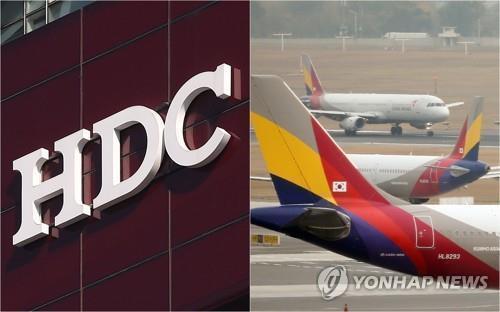 Meanwhile, Kumho Industrial Co., which signed a deal with the HDC-led consortium in December to sell its entire 30.77 percent stake in Asiana, has demanded that HDC complete the deal by mid-August.

Kumho Industrial has expressed regrets about HDC's request, saying it has provided all required documents and financial information to the construction company since December.

It remains unclear how HDC will react if the creditors counter-propose to sharply cut additional due diligence on the carrier, the creditor official said.

To help Asiana stay afloat, the KDB and the Export-Import Bank of Korea plan to inject a combined 1.7 trillion won into Asiana. Last year, the creditors extended a total of 1.6 trillion won to the carrier.

Creditors of Asiana Airlines mull counterproposal over due diligence

Creditors of Asiana Airlines mull counterproposal over due diligence