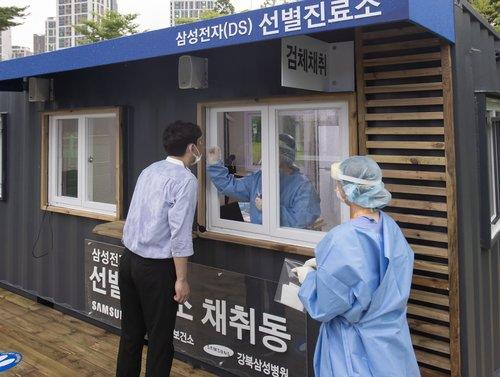 The number of daily new local infection cases briefly fell to four on July 20 but has since remained between 10 and 30 due to sporadic cases in Seoul and the surrounding area.

An average of 16.9 local infection cases occurred every day over the past 14 days, down 4.5 cases from the same period two weeks earlier, they said.

Of the local infections Monday, Seoul accounted for the largest share with two and one from Gyeonggi Province surrounding the capital city, the KCDC said.

A total of 10 cases have been confirmed at a coffee shop and a restaurant, both of them located in southern Seoul, as of Monday, up one from a day earlier, the authorities said.

Health officials said a person who visited the coffee shop appears to have spread the virus to the restaurant. They are not sure where the first patient had contracted the disease.

The KCDC said an ongoing epidemiological investigation showed that one of the COVID-19 patients linked to a campsite in Hongcheon, 100 kilometers east of Seoul, had actually visited the same coffee shop last month.

"Our investigation showed that one of the early COVID-19 patients from the campsite had visited the same coffee shop on July 22," KCDC chief Jeong Eun-kyeong said in a press briefing, adding that further probes should be conducted to know the exact infection route.

Health authorities said that imported cases may continue given resurgence in other nations, but ruled out the possibility that such infections may lead to local infections.

An average of 27.7 imported COVID-19 cases occurred every day over the past two weeks, up 0.3 from two weeks earlier, the KCDC said.

In an effort to slow down such imported cases, South Korea has applied on-board quarantine inspections on not only ships coming from Russia but also vessels departing from six high-risk countries -- Bangladesh, Pakistan, Kazakhstan, Kyrgyzstan, the Philippines and Uzbekistan.

A total of two COVID-19 patients died over the past two weeks, the KCDC said. Both of them were in their 70s or older.