SEOUL, Aug. 3 (Yonhap) -- The military has put service personnel on emergency standby to fully prepare for possible damage from heavy rains and to extend support to civilians, the defense ministry said Monday.

The defense ministry has been running its own disaster management team since late last month in the wake of forecasts of heavy downpours, with officials currently on the second stage of emergency duty that calls for the full preparedness to evacuate troops and equipment in contingencies.

"Each military unit has sought safety measures, including evacuation procedures in case of possible flooding or other unexpected situations," deputy defense ministry spokesperson Col. Moon Hong-sik told a regular briefing, adding that no major damage has been reported among military members and other assets.

The military is planning to mobilize around 300 service members and more than a dozen military equipment to help civilians prevent and recover from damage, the official added.

On Sunday, Defense Minister Jeong Kyeong-doo held a meeting of major commanders and called for measures to ensure the safety of service personnel and a firm readiness posture. He also ordered the military to closely watch out for land mines being washed away from North Korea. 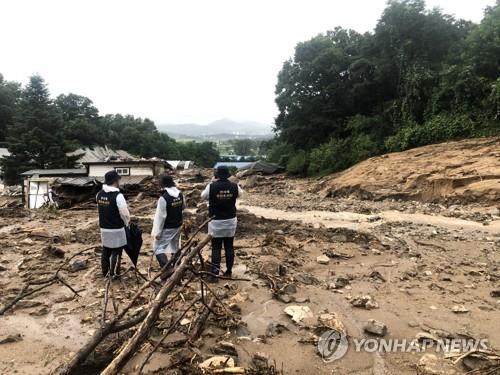 Military on standby over heavy rains, ready to extend support to civilians

Military on standby over heavy rains, ready to extend support to civilians