That has emerged as the hottest topic in local political circles since new laws intended to protect tenants from landlords and excessive rent increases went into effect at the end of July.

Jeonse refers to a unique Korean system in which renters give landlords a large returnable deposit instead of paying monthly rent.

Tenants generally prefer jeonse, as the entire deposited sum is returned to the tenant at the end of the lease. But the new laws have raised fears that excessive protection of jeonse tenants may prod landlords to switch to weolse, tolling the death knell for the jeonse system.

The ruling Democratic Party rammed through bills to allow tenants to extend their two-year jeonse contracts for another two years and place a cap of 5 percent on increases in jeonse deposits when the contracts are renewed. 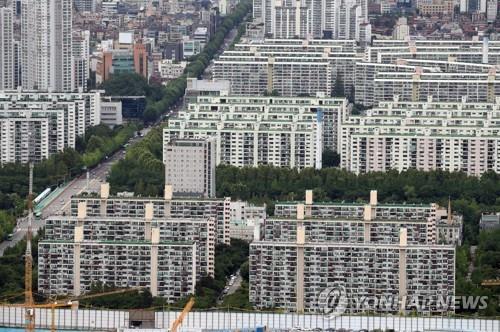 The main opposition United Future Party (UFP) boycotted the vote on the tenant protection bills, denouncing them as "undemocratic" and warning that the new laws will backfire on tenants with weolse gradually replacing jeonse.

Rep. Yun Hee-suk, a first-term UFP lawmaker, roused public sympathy with her five-minute parliamentary speech last Thursday, when she warned any hasty moves by the government and the ruling party to side with tenants will surely lead to a market collapse.

"Landlords, if they feel disadvantaged, will raise prices or defect from the market. The market is going to collapse the moment landlords are made to feel afraid of renting," Yun said, introducing herself as a tenant.

"Still, many people prefer jeonse but so many people have also been thrown into confusion as the system has been put on the path to extinction (due to new bills)," she lamented.

However, some ruling party lawmakers have argued that weolse can be better than jeonse, angering many tenants.

Rep. Yun Jun-byeong, a Democratic Party lawmaker, has added fuel to the debate on the jeonse system by publicly denouncing the UFP lawmaker for cherishing an "old-fashioned" way of thinking.

"Jeonse is doomed to disappear naturally as the income level increases. It's not a bad thing that a new era, in which all people live under weolse contracts, is approaching," he said. "A person who buys a 1 billion-won apartment with a 500 million-won loan is actually under a weolse contract. Paying the landlord a monthly rent is tantamount to paying interest to a bank. From the standpoint of ordinary people without lump sums amid the low-interest era, weolse is an easier way to rent a home than jeonse. Regardless of policies, weolse will replace jeonse," he insisted.

The rival parties also issued statements to the same effect.

UFP spokesman Bae Jun-young rebuked the ruling party lawmaker by saying it's commonplace that weolse is far more burdensome than jeonse particularly amid the low-interest trend, whereas the Democratic Party accused the UFP of only trying to represent the positions of landlords, instead of tenants, saying the new laws will eventually help stabilize the local housing market.

Experts seem divided. Some say the growing proportion of weolse will only increase the tenants' housing expenses, while others say the switch to weolse will free up extra cash that can be invested into the stock market, for instance, to help enhance the national competitiveness.

According to government data, there were about 670,000 jeonse contracts and nearly 460,000 weolse contracts signed nationwide in the first half of this year.

People's Solidarity for Participatory Democracy (PSPD), a progressive civic organization, and other civic groups dedicated to the rights of tenants, called on the Moon Jae-in government to devise additional measures to deter the anticipated transition to weolse during a symposium in Seoul on Monday.

"Jeonse is the last bastion for the young people and low-income households, because it is cheaper than weolse. The jeonse-weolse switch ratio stipulated by the presidential decree should be lowered," said Choi Eun-young, head of the Korea Center for City and Environment.

As of July, the jeonse-weolse transition ratio was set at 4 percent, which means a jeonse deposit of 300 million won (US$251,500), for instance, can be switched into a monthly rent of 1 million won.

Choi called for supplementary legislation efforts, noting landlords can take advantage of loopholes in the revised bills to sharply increase jeonse deposits every four years. She also said the 5 percent cap on the jeonse deposit increase was set too high.

In addition, other civic activists called for measures to better protect tenants' jeonse deposits and expand the supply of public housing in the Seoul metropolitan area. 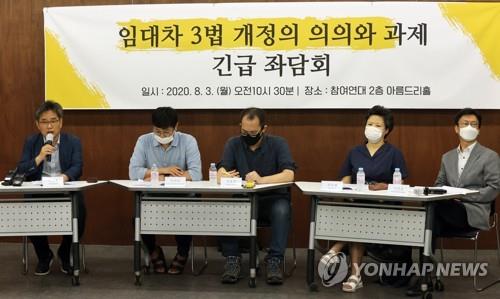 "From May 2017 (when Moon was inaugurated) to May 2020, Seoul's average housing price rose by 180 million won, or 34 percent, to 710 million won. In case of apartments in Seoul, the average price surged by 310 million won, or 52 percent, from 610 million won to 920 million won," the CCEJ said in a news conference, citing data from KB Bank and government institutions.

It went on to insist that the Ministry of Land, Infrastructure and Transport's claim of a 14 percent increase in Seoul apartment prices and 11 percent rise in the capital's entire housing prices under Moon is "unrealistic."

Seoul's apartment price increase rate under Moon was 12 times higher than during the combined period of the conservative Lee Myung-bak and Park Geun-hye governments, it argued, saying the Moon government has poured out a string of "wrongful" real estate policies on the basis of wrong data.

Without fundamental countermeasures, Seoul's apartment prices may spiral out of control during the remainder of Moon's tenure, the CCEJ said.

(LEAD) Debate heating up on fate of 'jeonse'

(LEAD) Debate heating up on fate of 'jeonse'