SEOUL, Aug. 3 (Yonhap) -- South Korea is bracing for the possibility of Japan taking retaliatory measures after a local court carries out a decision to sell off assets of a Japanese firm to compensate victims of wartime forced labor, the foreign ministry said Monday.

Starting Tuesday, a South Korean court will be able to start a procedure to auction off some shares that Nippon Steel Corp. has in a joint venture company established with POSCO to cash them out for compensating forced labor victims.

Japan has warned of strong countermeasures if the procedure for sales goes ahead, with Chief Cabinet Secretary Yoshihide Suga saying Saturday that Tokyo is looking at "all available measures" and "has a clear direction about it."

"The government is keeping a close eye on the relevant situation and has been reviewing the direction of its response while leaving all possibilities open," the foreign ministry said.

"The government has been in close consultations with the Japanese government while listening to various opinions from all walks of life as it respects the judicial decision and takes the rights of victims and bilateral relations into account, and we will continue to do so going forward," it said.

The Pohang branch of the Daegu District Court served the Japanese defendant with the public notice in early June by publishing it on its website since Japan's foreign ministry failed to deliver the documents to the company. The two-month public notification is considered completed as though the papers have been received by the defendant, allowing the court to proceed with the asset sales.

The court granted the seizure of Nippon Steel's assets in January last year after the company refused to comply with the 2018 South Korean top court ruling that ordered it to compensate four Korean victims for forced labor in the 1940s when the Korean Peninsula was under Japan's colonial rule. 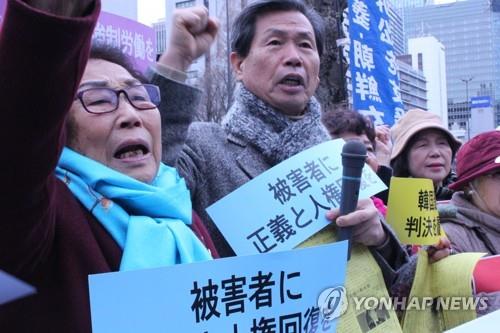