SEOUL, Aug. 3 (Yonhap) -- South Korea's state-run Korea Development Bank (KDB) on Monday warned that property developer Hyundai Development Co. (HDC) should proceed with the proposed 2.5 trillion-won (US$2.1 billion) deal to buy Asiana Airlines Co., rejecting HDC's request for another round of due diligence on the country's No. 2 air carrier.

"We cannot accept the demand for a new round of due diligence," KDB Vice President Choi Dae-hyun said in an online briefing, calling the HDC's demand an excessive one that goes way beyond ordinary procedures in a merger and acquisition deal.

HDC, a major property developer, has completed seven weeks of due diligence on Asiana Airlines.

But the property developer has recently demanded additional due diligence on the debt-laden carrier for 12 weeks beginning in mid-August, claiming it will be forced to shoulder Asiana's heavy debts if it acquires the airline without looking into its current financial conditions hit hard by the coronavirus pandemic.

Choi said the collapse of the deal will be inevitable unless HDC takes a step that would show its sincerity for an Asiana takeover, noting the HDC's request may be aimed at delaying the deal's close. 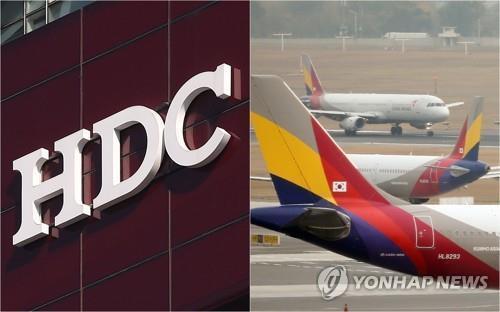 KDB Chairman Lee Dong-gull pressed HDC to make a determination on whether it will proceed with the deal or not as he warned that HDC will be to blame for a looming collapse of the deal.

"I expect that HDC will not file a suit seeking refund of advanced payment," Lee said, noting that KDB and Kumho Industrial have done nothing wrong.

The KDB, Asiana's main creditor bank, and the Export-Import Bank of Korea plan to inject a combined 1.7 trillion won into Asiana to help the carrier stay afloat. Last year, the creditors extended a total of 1.6 trillion won to the carrier.