A total of 8,984 supporters entered six stadiums during the two-day period, accounting for 68.1 percent of 13,194 available seats. 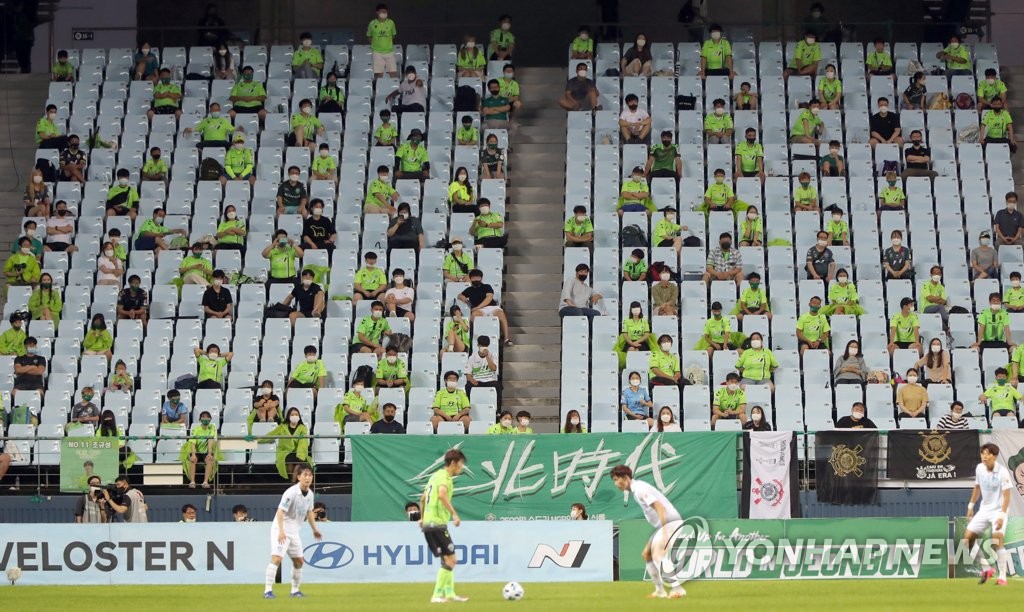 On Saturday, Jeonbuk Hyundai Motors, which hosted Pohang Steelers at Jeonju World Cup Stadium in Jeonju, 240 kilometers south of Seoul, sold 2,959 tickets, or 70.4 percent, out of 4,205.

Incheon United played against Gwangju FC at Incheon Football Stadium in Incheon, 40 kilometers west of Seoul, on the same day. Its 1,865 supporters bought 97 percent of 1,929 tickets on sale.

In the Suwon-Daegu FC match at Suwon World Cup Stadium in Suwon, south of Seoul, on Sunday, fans filled 1,577 out of 3,155 available seats.

The second-tier K League 2, meanwhile, saw a combined 2,560 fans attend five matches over the weekend, taking up 45.1 percent of 5,680 tickets on sale.

Due to the coronavirus outbreak, the opening kickoff of K League was pushed back from Feb. 29 to May 8, and the season began without fans.

As the pace of COVID-19 spread has slowed down in recent weeks, the South Korean health authorities allowed sports teams to open their stadium gates.

The Korea Baseball Organization (KBO) got the ball rolling on July 26, and the K League started Saturday.

For both baseball and football, teams permit fans for just 10 percent of their stadium capacity for the time being, with all tickets only purchased online with credit cards.

Fans must go through temperature checks and leave their personal information. Eating, chanting and singing are prohibited at their seats.