The Korea Baseball Organization (KBO) said it will test run the automated ball-strike system in the Futures League game between the Hanwha Eagles and LG Twins at LG Champions Park in Icheon, southeast of Seoul, on Tuesday.

The so-called robot umpires will call balls and strikes in 26 upcoming minor league games, including the Tuesday match.

"We've installed the equipment for the system at Futures League stadiums of LG Champions Park and Masan Baseball Stadium," the KBO said. "Based on the results and opinions from the field, we will review the feasibility of the introduction of robot umpires to the KBO League in the future."

The KBO has announced plans to use the automated system in the Futures League for the entire 2021 season and apply it to the KBO's top league as early as 2022.

Though the system is colloquially called the robot umpire, it doesn't involve any robots standing behind the catcher to make calls. A radar-based ball-tracking system will identify a pitch's location, and the information will reach the home plate umpire via his earpiece for the call on the field. 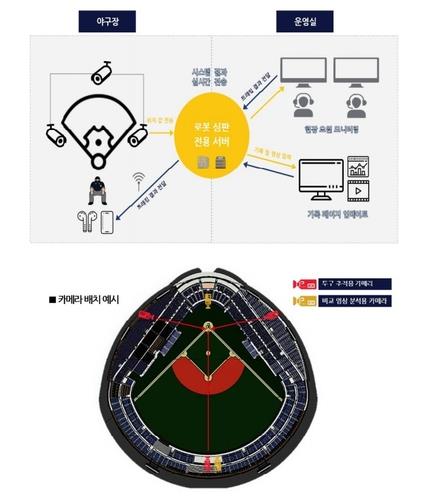