The North partially opened the floodgates of Hwanggang Dam on the western inter-Korean border and sent water into the Imjin River, a move that put authorities here on alert against the potential rise in water levels in the South.

The water discharge came as the North's official Korean Central News Agency reported that "special" heavy rain warnings had been issued for Pyongan, Hwanghae and Jagang Provinces, Kaesong and other parts of the country.

The South's military and intelligence authorities are known to have detected signs of the North opening the floodgates through various monitoring tools, as the North did not notify the South of the move with inter-Korean military communication lines cut off.

The military authorities here predicted that the North could additionally open floodgates of the dam, as some areas under the downpour warnings are forecast to see 500 millimeters of rain or more overnight.

The North had agreed to notify the South in advance of plans to open the floodgates after its unannounced discharge of water from Hwanggang Dam in September 2009 caused waters to rise abruptly and left six South Koreans in the border region dead.

When heavy rains hit the North in September 2010, the North notified the South through the western military communication line prior to its possible discharge of the water from the border dam.

If the North abruptly discharges water into the border river, it could damage fishing gear set up there or cause injury to people. 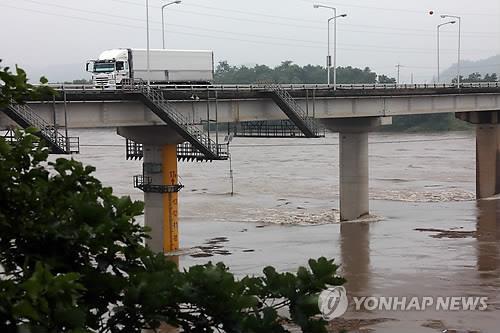