Staying in Milwaukee with his teammates, he is healthy and waiting for the resumption of games, according to the source close to Kim.

The club has reported 13 positive COVID-19 cases so far, including seven players, since two infections were first confirmed on Friday (U.S. time).

The Cardinals are now quarantining in Milwaukee and are receiving daily tests, MLB announced.

With the Cardinals' three-game weekend series against the Milwaukee Brewers postponed, their scheduled games against the Detroit Tigers, starting Tuesday, were also put on hold.

The left-hander, who joined the Cardinals from the 2020 season, made his MLB debut against the Pittsburgh Pirates at Busch Stadium in St. Louis on July 24, the Cardinals' first game of the 60-game regular season. He earned a save in the team's 5-4 victory. 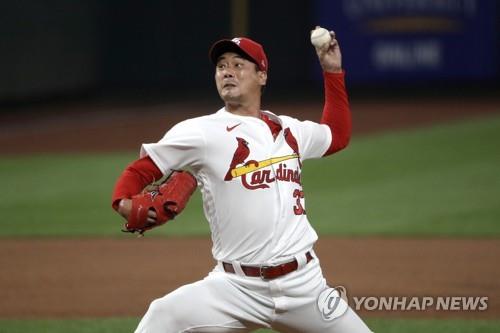