SEOUL, Aug. 4 (Yonhap) -- An Army draftee and a military intelligence command officer tested positive for the new coronavirus, bringing the total number of infections among the military population to 79, the defense ministry said Tuesday.

The soldier based in Yangju, just north of Seoul, has been in isolation after coming into close contact with an outside counselor who was infected with COVID-19 late last month, according to the ministry.

The soldier tested positive on his second test required to exit mandatory quarantine, it added.

The counselor was found to have visited several front-line units in the adjacent Pocheon areas before he tested positive, and 19 virus patients at the barracks are believed to be linked to the man.

Another fresh case is a warrant officer affiliated with the Defense Security Support Command in Gwacheon, Gyeonggi Province, according to the defense ministry.

He appears to have contracted the virus after visiting a restaurant in Seoul where a COVID-19 patient stayed, command officials said, adding that contact tracing is under way.

The command carried out disinfection work at its headquarters building and had all of its members undergo a virus test, they noted.

The total number of service members in quarantine stands at 466, and the military authorities have put another 1,673 in isolation as a preventive measure.

Nationwide, South Korea reported 34 new cases of the new coronavirus Tuesday, including 13 local infections, raising the total caseload to 14,423, according to the Korea Centers for Disease Control and Prevention (KCDC). 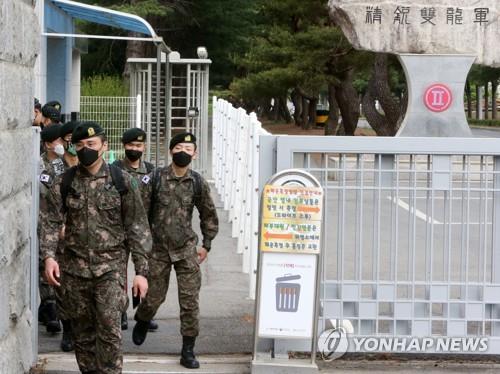