The favorability rating of Rep. Lee Nak-yon of the ruling Democratic Party (DP) fell to 25.6 percent at the end of July from 30.8 percent a month earlier. His popularity has continued to slide after peaking at 40.2 percent in April.

The score of Lee Jae-myung from the same party rose to 19.6 percent, the highest he has ever seen, from June's 15.6 percent, after the Supreme Court overturned his conviction of election law violations in mid-July.

The gap between the two liberal politicians narrowed to six points from 15.2 points. 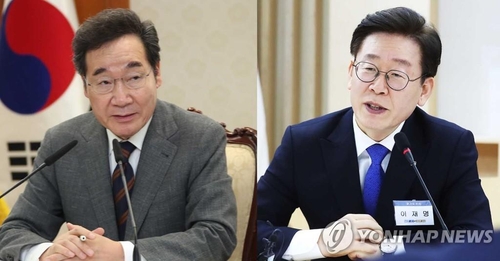 Yoon saw his popularity grow 3.7 percentage points to 13.8 percent. He has emerged as a potential candidate of the conservative opposition United Future Party (UFP), although he has not declared any interest in politics.

The survey, commissioned by OhmyNews, a media outlet, was conducted on 2,560 adults across the country from July 27-31. It has a margin of error of 1.9 percentage points with a 95 percent confidence level.
(END)