GWANGJU, Aug. 4 (Yonhap) -- Human remains found at the site of a former prison in Gwangju appear to be unrelated to the May 18 Democratization Movement that took place in the southwestern city in 1980, officials said Tuesday.

The remains of 262 people have been discovered at the former prison's graveyard, where deceased prisoners with no family ties were buried, triggering speculation that they may belong to victims of crackdowns during the pro-democracy uprising.

The National Forensic Service (NFS) has so far completed its analyses of the remains of 101 bodies but failed to find any connection between them and the 1980 uprising, according to officials at the May 18 Memorial Foundation. 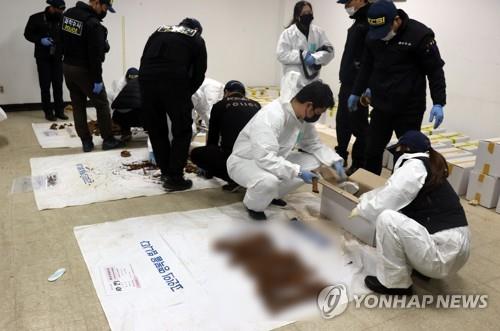 The NFS has secured DNA from 47 of them for identification but failed to secure any genetic information from the other 54 bodies due to their poor preservation conditions, they noted, adding 45 of the 47 bodies with DNA samples were male.

DNA comparisons between the prison remains and families of victims who went missing during the May uprising yielded no match at all, they said.

The NFS plans to conduct further analyses on the other bodies, they said.

The remains were first uncovered in December last year during a government-led project to relocate the former prison graveyard, prodding some to speculate that some of the remains may belong to people who went missing in Gwangju in 1980.

On May 18 that year, the military cracked down on demonstrators, including students, protesting against then President Chun Doo-hwan, who had taken power in a military coup a year earlier. The harsh quelling of the uprising left hundreds of people dead and thousands wounded.