Countering the opposition protest that the revisions will increase tax burden, Rep. Park Hong-keun of the DP said during the plenary session that "only 0.99 percent of the entire public is subject to property ownership taxation."

UFP lawmaker Rep. Choo Kyung-ho accused the ruling party of ramming the bills through the assembly in a process "that can hardly be called democratic." 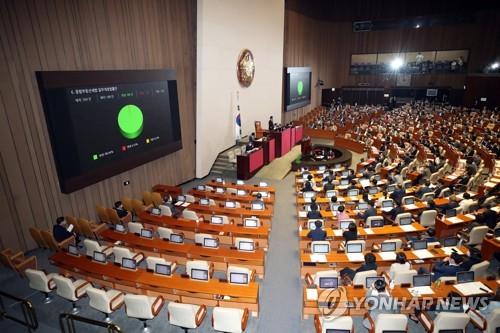 Unilaterally supported by the DP, a revision to the law concerning reports on real estate transactions also passed through the assembly. The revision will newly require information on a house lease contract, including its contractors, the amount of rental deposit or fees, as well as the lease period to be reported to concerned municipalities within 30 days of the deal. The new rule will go into effect on June 1 next year.

A set of three separate bills have also been approved, opening the way to accelerate the launch of a new investigative body targeting corruption by high-ranking government officials, tentatively named the Corruption Investigation Office For High-ranking Officials.

The revised laws legally paved the way to hold a parliamentary hearing on the confirmation of a nominee to head the new body.

Also passed during the session was a revision to the National Sports Promotion Act, aimed to prevent bullying and violence by sports trainers following the apparent suicide of former Gyeongju triathlete Choi Suk-hyeon who was verbally and physically abused by a head coach and triathletes.

Another bill to revise the Government Organization Act also won parliamentary approval during the session, paving the way for the government's plan to elevate the administrative power and independence of the Korea Centers for Disease Control and Prevention that has been at the center of South Korea's efforts to contain the new coronavirus.