SEOUL, Aug. 4 (Yonhap) -- Two unlawful defection attempts were reported at a government-designated coronavirus quarantine facility for foreigners in Incheon, west of Seoul, in less than 20 days, police said Tuesday, despite authorities' repeated pledges to heighten supervision of arrivals from abroad.

According to police, a Vietnamese national escaped from an Incheon hotel designated by the health ministry as a temporary foreign quarantine accommodation around 4 a.m. Monday before being detained in Seoul eight hours later.

The 39-year-old Vietnamese man, who entered the hotel on July 23 to self-quarantine for two weeks under Korean law, was accused of leaving the facility without permission by using a descending life line from his room on the fifth floor. The man was caught using the emergency fire device on a surveillance camera but monitoring staff failed to detect his escape, police said. 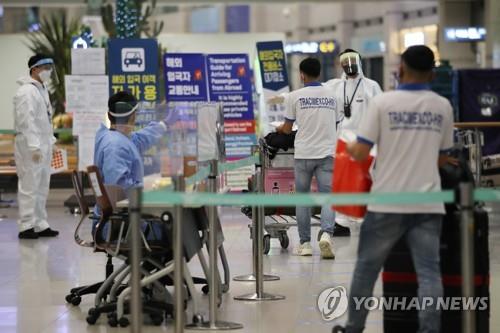 On July 21, an American man in his 20s was detained by police after escaping from the same hotel and is now awaiting deportation. The man was found to have left the facility through an unmonitored emergency exit and bought cigarettes at a convenience store about 100 meters away.

Following the repeated escape attempts, Incheon police have increased the number of patrol officers tasked with monitoring the hotel by six to 33, who are on duty 24 hours a day in three shifts.

Under the quarantine measures that took effect in early April, all entrants from overseas -- both Koreans and foreigners -- are obliged to self-quarantine at their residences or government-designated facilities for 14 days. Violators of the self-quarantine rules are fined and deported.

In late July, three Vietnamese nationals were arrested after escaping from a COVID-19 quarantine facility in Gimpo, west of Seoul.