SEOUL, Aug. 4 (Yonhap) -- The foreign ministry will look into related regulations before deciding whether to reinvestigate a senior diplomat accused of sexually assaulting a local embassy employee in New Zealand, an official said Tuesday.

On Monday, the ministry said it ordered the diplomat to return home immediately from his current post in the Philippines, as New Zealand has been pressuring South Korea to cooperate with a police investigation into the case.

When asked by reporters Tuesday whether the ministry plans to reinvestigate the diplomat, a ministry official said, "We need to look into regulations."

"He has been ordered to return, and should have to do so at an early date," the official added.

The New Zealander employee has accused the diplomat of groping parts of his body on three occasions in 2017. The case has drawn fresh attention after New Zealand Prime Minister Jacinda Ardern raised the issue in a phone call with President Moon Jae-in last week.

The diplomat left Wellington in February 2018 and is now stationed in the Philippines.

Upon his return, the diplomat is expected to undergo a two-week mandatory self-isolation in line with South Korea's control measures against the coronavirus, according to a source close to the matter.

New Zealand has expressed disappointment that Seoul did not waive immunity so as to allow the investigation to proceed, according to news reports in New Zealand.

The Seoul official denied such claims on Monday, stressing that the foreign ministry had proposed ways to cooperate with the ongoing police investigation in New Zealand within the scope of not waiving diplomatic immunity, such as allowing embassy officials to comply with the probe in written interviews, but Wellington has refused. 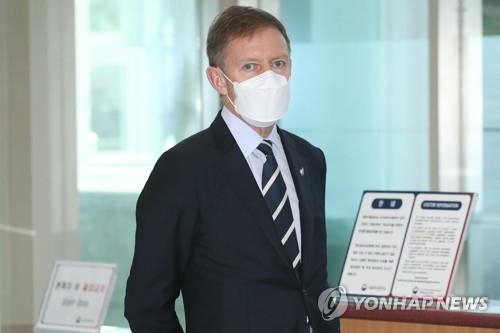