Navy Vice Adm. Jon Hill made the reference during the virtual Space and Missile Defense Symposium while discussing the various missile threats posed to the United States.

"The rogue nations of North Korea and Iran, and then the near-peer threats of China and Russia, develop very fast and so this is a very, very complex and tough environment to live in," Hill said.

Top U.S. officials, including Secretary of State Mike Pompeo and Defense Secretary Mark Esper, have sometimes referred to North Korea and Iran as "rogue" states over their pursuit of nuclear weapons and ballistic missiles.

Pyongyang has reacted angrily to the term, saying Washington should not test the North's patience if it doesn't want to have "bitter regrets afterwards."

In the latest such reaction, North Korean leader Kim Jong-un's sister, Yo-jong, mentioned in a statement last month that Esper made "hostile remarks of labeling my country as a 'rogue state.'"

She was referring to Esper's use of the term in a July 7 video message for members of the force.

U.S. President Donald Trump and Kim have met three times in a bid to reach a deal but failed to make progress since the collapse of their second summit in Vietnam in February 2019. 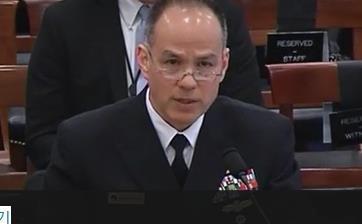