But seven low-cost carriers (LCCs) are widely predicted to suffer greater setbacks in the April-June period as the COVID-19 outbreak has led to a tumble in demand for international air travel.

Korean Air Lines Co., South Korea's top full-service carrier, is projected to post operating income of 82.5 billion won (US$69.2 million) for the second quarter, a sharp turnaround from a 98.6 billion-won loss a year earlier, according to market estimates.

Amid a tumble in international passenger demand, sales are estimated to reach some 2.2 trillion won for the three-month period, down 29 percent from the previous year.

Revenue from its cargo business is projected to reach 1.2 trillion won, more than half the total. Before the coronavirus outbreak, cargo accounted for some 20 percent of total sales. 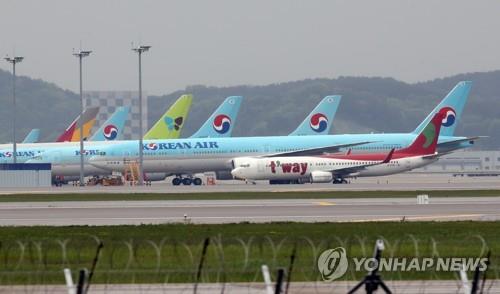 No. 2 industry player Asiana Airlines Co., which has been put up for sale due to a cash crunch at its parent group, is also forecast to pull off an earnings surprise.

Analysts said Korean Air and Asiana appear to have posted relatively good results in the second quarter thanks to brisk cargo business, forecasting a positive outlook for the third quarter.

Also responsible were their cost-cutting efforts, including furloughs and other measures, they added.

In contrast, the country's seven low-cost carriers are feared to see their operating losses widen for the second quarter from three months earlier due to a plunge in international air travel, their main revenue source.

Jeju Air Co., South Korea's budget carrier, is to report its second-quarter results later on Wednesday. Most other carriers are expected to unveil earnings on Aug. 14.

In the face of the coronavirus pandemic, South Korean carriers are currently operating only 20 percent of their international flights despite the summer vacation season, they said.
(END)