SEOUL, Aug. 5 (Yonhap) -- The foreign ministry said Wednesday that there have been no reports of South Korean casualties yet in this week's massive explosion in the Lebanese capital of Beirut that left more than 100 people dead and thousands injured.

"Immediately after the accident, the South Korean Embassy in Lebanon started checking an online group chat room of residents in Lebanon to see if there was any damage to citizens. As of now, there were no reports of damage," a ministry official said.

The embassy, in cooperation with the Lebanese government, will keep trying to ascertain if residents there suffered any damage or injuries, and it will provide necessary consular assistance if necessary, the official added.

Two glass windows were broken on the fourth floor of the South Korean Embassy in Lebanon, 7.3 kilometers away from the scene of the explosion, the ministry said. 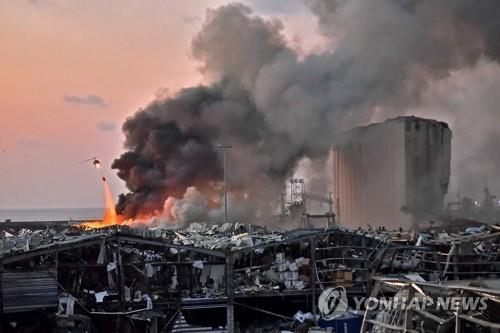