SEOUL, Aug. 5 (Yonhap) -- A former TV reporter was indicted and referred for trial on Wednesday in an alleged blackmail case involving a key aide to the nation's top prosecutor.

The Seoul Central District Prosecutors Office announced its indictment of Lee Dong-jae, a former reporter of cable network Channel A, on attempted extortion charges, 20 days after he was put under pre-trial detention on July 17.

The 35-year-old Lee is suspected of using his close ties with ranking prosecutor Han Dong-hoon, a close associate of Prosecutor General Yoon Seok-youl, to blackmail a jailed financier into leaking allegedly corrupt acts by Rhyu Si-min, a pro-government commentator now serving as chairman of the Roh Moo-hyun Foundation.

The inmate claimed that Lee repeatedly pressed him by sharing the voice recording of a conversation between the reporter and Han and indicated the possibility of his family being investigated by prosecutors.

The reporter denied the accusation.

Contrary to expectations, the prosecution didn't mention whether Han and Lee colluded in the alleged blackmail case in the former reporter's indictment.

The prosecution said it will investigate further before deciding whether to push to punish Han as an accomplice in the alleged blackmail case. 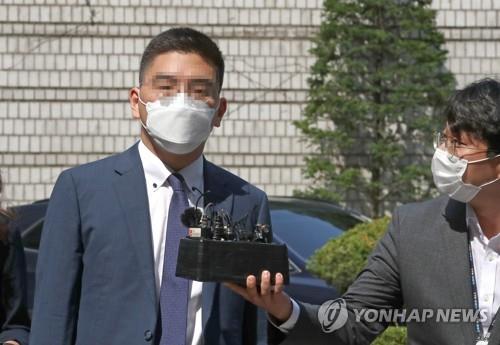