SEOUL, Aug. 5 (Yonhap) -- A sharp political debate has escalated over Prosecutor General Yoon Seok-youl's remarks that dictatorship disguised under the cloak of democracy should be repelled.

Attending a welcome event Monday for newly appointed prosecutors at the Supreme Prosecutors Office in Seoul, Yoon said, "Liberal democracy, a core value of the Constitution, refers to a real democracy that rejects autocracy and totalitarianism under the pretense of democracy."

"Liberal democracy can be realized through rule of law," he said.

His rare public comments, which came for the first time in almost 40 days, have set off heated political debate over whether the top prosecutor was taking a snipe at Justice Minister Choo Mi-ae, with whom he has been in discord, and, by extension, the government.

While the ruling Democratic Party (DP) refrained from officially responding, its rank-and-file members quickly moved to protest against what they viewed as politically charged statements by the chief prosecutor.

Billing Yoon's comments as an "anti-government declaration," DP lawmaker Shin Dong-kun argued Yoon made clear that he opposed the prosecutorial reform move and, in effect, had broken ranks with the government.

Another lawmaker, Yoo Ki-hong, from the same party wrote on his Facebook page that Yoon should reflect on himself first and not "intervene in politics by abusing the prosecution's power." 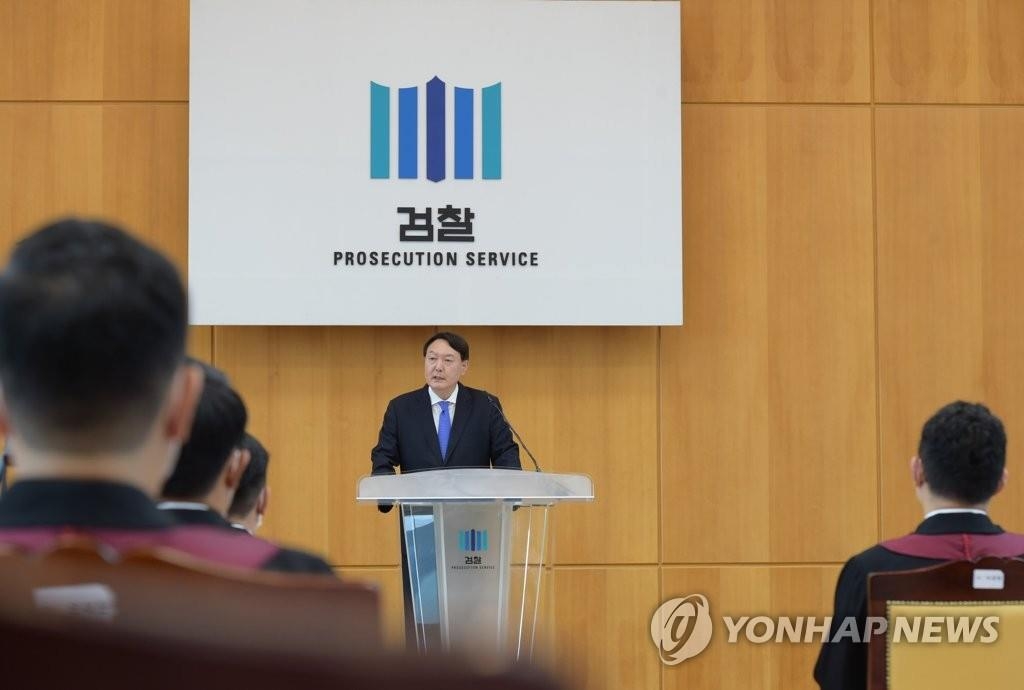 On the other side of the political spectrum, the main opposition Liberty Korea Party (LKP) took sides with Yoon.

He also said, "There are worrying voices that things have been done under the name of democracy, but in fact are not (democratic)," referring to real estate and other bills railroaded by the ruling party, which holds a majority of parliamentary seats.

The minor opposition People's Party also issued a statement in support of Yoon, calling on him to "serve as the people's hope as an impartial and fair prosecutor general."

For months, feuds between Yoon and Choo have been in the public domain, most notably over an alleged blackmail case in which Yoon's close aide, Han Dong-hoon, is accused of being involved.

In early July, the justice minister ordered Yoon to stay away from the ongoing investigation, a rare directive that Yoon eventually gave in to. Last week, the ministry's reform committee urged the prosecution to abolish the top prosecutor's right to command individual investigations. It also recommended that the top prosecutor be appointed from among a pool of outside experts with various backgrounds.

In the latest twist to the saga, prosecutor Han last week was engaged in an ugly brawl with a senior investigator during a search and seizure operation.

Amid political wrangling, Yoon has surged in opinion polls on the popularity of presidential hopefuls, though he has never made public his intention, if any, to run for president.

In a recent survey by Realmeter, he ranked third with 13.8 percent of the vote, trailing former Prime Minister Lee Nak-yon of the DP with 25.6 percent, and Gyeonggi Gov. Lee Jae-myung, also from the DP, with 19.6 percent.