ANDONG, South Korea, Aug. 5 (Yonhap) -- A former captain of a local triathlon team was arrested Wednesday for allegedly assaulting her colleagues, including Choi Suk-hyeon, who took her own life in June after being abused by her coach and team members.

The Daegu District Court issued the arrest warrant for Jang Yun-jung, a former athlete of Gyeongju City Hall's semi-pro club, on charges of assaulting Choi and other colleagues, citing concerns that she may flee or destroy evidence.

The late athlete in March accused the 31-year-old Jang, another teammate, head coach Kim Gyu-bong and team therapist Ahn Joo Hyeon of verbally and physically abusing her. She died of suicide after her pleas for help went unanswered by regional and national sports authorities.

According to audio recordings she left behind, Choi was apparently struck and verbally abused by the four individuals, prompting legal and sports authorities to belatedly look into the case.

Jang earlier claimed that she was the "biggest victim" of this scandal, and Ahn was the only person to be blamed for the incident.

Asked about her stance by reporters on Wednesday, however, Jang did not make any comments.

The Korea Triathlon Federation banned coach Kim and Jang for life and suspended Kim for 10 years. All three have appealed the penalties. 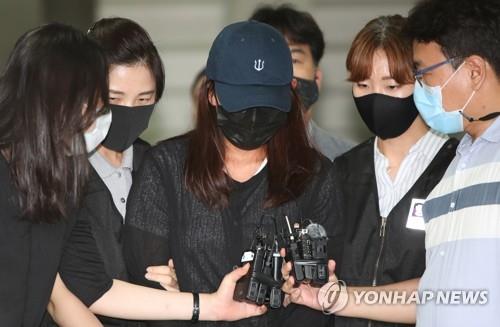