SEOUL, Aug. 5 (Yonhap) -- President Moon Jae-in sent a message of condolence to his Lebanese counterpart, Michel Aoun, Wednesday over a deadly explosion in Beirut that killed more than 100 people and injured 4,000 others.

The massive blast occurred on Tuesday at Beirut's port, as ammonium nitrate, a highly explosive material, caught fire while in storage at a warehouse, according to media reports.

In his message, Moon said that he was deeply sorry for the deadly explosion that resulted in heavy loss of life.

"I'd like to send my deepest condolences to the victims, and convey heartfelt sympathies to the bereaved family members who lost their loved ones," the message read.

"I sincerely hope that the damage will be recovered swiftly under your leadership, and the Lebanese people will come out of shock and sorrow and recover their calm," Moon added. 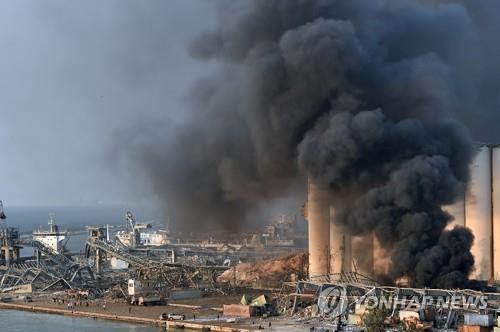