In late July, North Korea declared a "maximum emergency system" against the coronavirus after it claimed a defector returned home from the South with symptoms. It has since intensified antivirus efforts, putting the border town of Kaesong under complete lockdown since July 24 and tightening its national borders.

"Then the meeting heard a report on the anti-epidemic work and the situation in Kaesong City that is completely locked down under the state's maximum emergency system, discussed and decided on the Party Central Committee's special supply of food and funds to the city to stabilize the living of its citizens, and instructed relevant field to take immediate measures in this regard," the Korean Central News Agency (KCNA) said.

KCNA said that over 550,000 relief items of more than 30 kinds have been urgently sent to Kaesong since the start of the maximum emergency system. 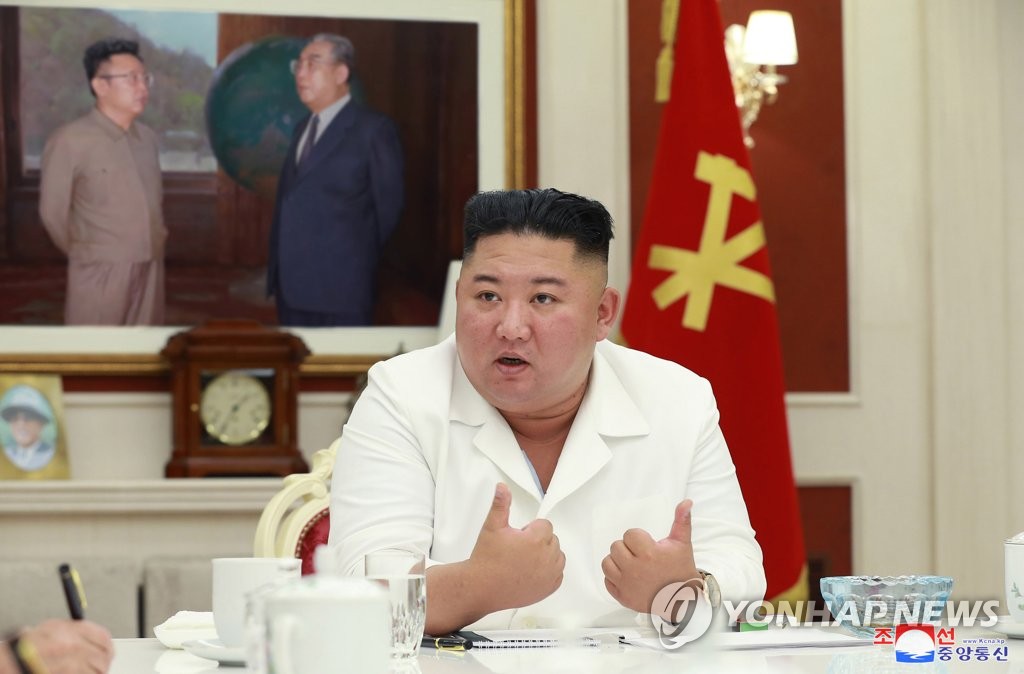 Officials at the meeting also decided to launch "a new department within the Central Committee of the Party and studied and discussed the ways to radically improve the personnel affairs system of the Party," KCNA added without elaborating.

This marks the first time North Korea has disclosed the results of the party's executive policy council meeting since it began in 2016.

Experts say the North's move to disclose the results of the meeting may reflect its desire to leave room for inter-Korean cooperation.

"I don't think they are reaching out to South Korea for any immediate resumption of inter-Korean cooperation but they're naturally exposing the current situation in the North to leave room for humanitarian cooperation for the two Koreas in the future, especially if damages from the flood get worse there," Yang Moo-jin, a professor at the University of North Korean Studies, said.

"Kim must have wanted to listen to the opinions of key officials in the party as the two issues involving the defector and lockdown of Kaesong are important in keeping North Koreans under control and solidifying unity internally," Yang said.

As the two-week quarantine period will end this week in Kaesong, officials could have discussed whether to continue with the lockdown of the city, he added.

North Korea has claimed to be coronavirus-free but many observers have questioned the claim since it has a long and porous border with China and is known to lack the necessary infrastructure in coping with such a highly contagious disease.

The North has also taken relatively swift and drastic measures, shutting down its borders since late January and tightening quarantine measures.