SEOUL, Aug. 6 (Yonhap) -- Kakao Corp., the operator of South Korea's top mobile messenger KakaoTalk, said Thursday its second-quarter net profit jumped nearly five times from a year earlier on the back of robust growth of its e-commerce and contents services based on its messenger platform.

Net profit reached 145.2 billion won (US$122.2 million) in the April-June period on a consolidated basis, compared with 31 billion won a year earlier, the company said in a regulatory filing.

Kakao said it enjoyed brisk performance in both its platform and e-commerce businesses.

"Global KakaoTalk usage surpassed 52 million. In the country, the average number of users jumped by 9 percent on-year and the total amount of messaging jumped by 34 percent on-year during the period," Yeo Min-soo, co-CEO of Kakao, said in a conference call.

Kakao said the revenue from its platform business surged by 51 percent on-year to 492.7 billion won over the cited period thanks to the steady growth of Biz Message and Talk Biz.

Yeo said its platform businesses based on KakaoTalk are expected to show brisk performance down the road. At Talk Biz Board, individual sellers can sell their products through a platform connected to KakaoTalk.

Revenue from the content business also expanded by 13 percent on-year to 460.2 billion won.

Revenue from paid content, such as webtoons, skyrocketed 46 percent on-year to 119 billion won during the quarter, the company said. 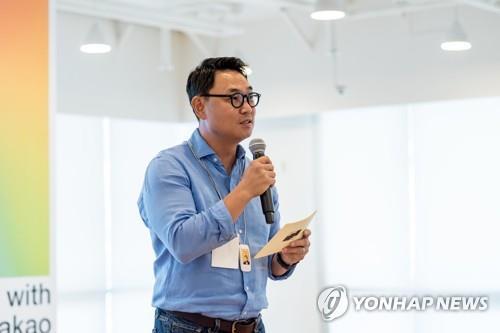