SEOUL, Aug. 6 (Yonhap) -- Major highways running across Seoul were partly closed on Thursday, with the first flood alerts in nine years issued for areas near a major bridge on the Han River, as heavy rains pushed up the water level of the river that flows through the capital city.

Traffic congestion was reported in these areas, with the average speed of vehicles on Seoul roads drastically slowing to 11.8 kilometers per hour at 7 p.m. 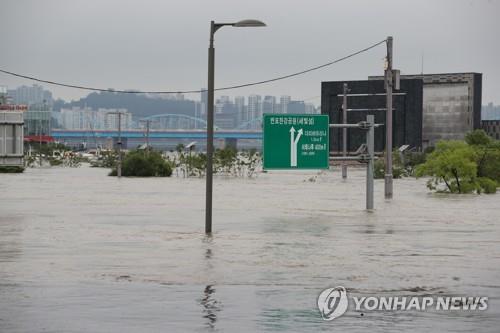 The water level over Jamsu Bridge reached a record high level of 11.3 meters shortly before noon, completely submerging the bridge under water. The previous highest point was 11.03 meters posted in the July monsoon in 2011, according to the Han River Flood Control Center.

As of 11 a.m. a flood alert was also issued for areas near the Han River Bridge in central Seoul.

The water line was predicted to go up further, possibly over the 8.5-meter level at around the noon. It was the first time since July of 2011 that a flood alert has been in place at this point of the river.

All the 11 riverside parks adjoining the Han River were also closed to visitors and vehicles due to safety concerns. 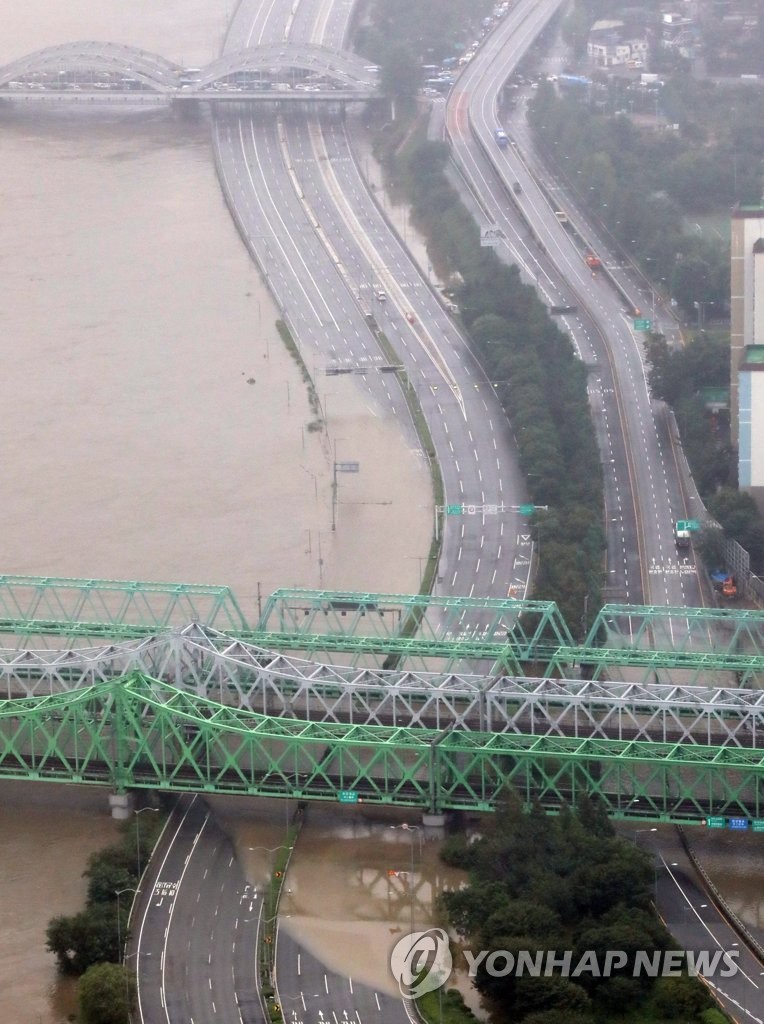 As heavy rains continue to wreak havoc in the country's central regions, including the Seoul metropolitan area, the death toll has risen to 17 this month, according to the Central Disaster and Safety Countermeasure Headquarters.

Ten people remained missing as of 4:30 p.m. on Thursday due to the cloudburst, while more than 2,000 people were displaced from their homes in areas hit hardest, such as North and South Chungcheong provinces, Gyeonggi Province and Gangwon Province.

Separately, five more people, including a police officer and a public servant, went missing in Chuncheon, 85 kilometers northeast of Seoul.

A rubber boat and a patrol ship were sent to help after a police vessel capsized while engaged in an operation to fix a facility at Uiam Dam in the city.

All three ships, carry eight people altogether, were swept away by flood waters at the dam, leaving five of them missing and one dead. One of them narrowly escaped, while the other was rescued.

Three train lines, including Taebaek and Chungbuk, remained totally or partially out of service, while 56 roads across the affected areas were off limits due to mudslide damage from the torrential rains, according to authorities.

As of Thursday afternoon, more than 6,000 houses and facilities were reported flooded or damaged in the latest bout of heavy rains. A total of 8,161 hectares of farm land have been inundated or ravaged.

The sky cleared up in the afternoon for most of the regions, with all the heavy rain alerts lifted nationwide except for mountainous areas on Jeju Island. But authorities were still on guard against further damage as the Seoul metropolitan area and central regions were expected to experience more rainfall on Friday. 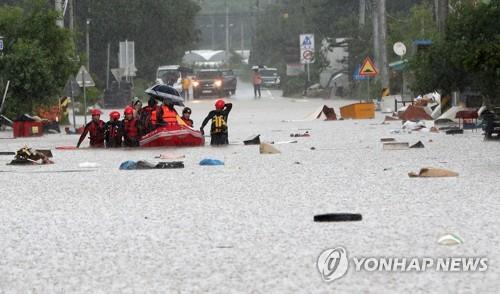 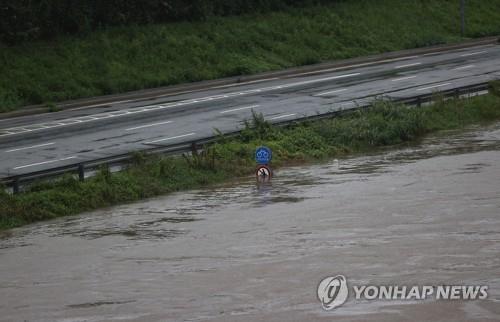