SEJONG, Aug. 6 (Yonhap) -- South Korea's trade minister, who is running to become the next head of the World Trade Organization (WTO), said Thursday she wishes to reform the body to become more resilient to never-before-seen hurdles, such as the virus pandemic.

"Recently, each country was on its own due to the unprecedented economic crisis, such as the new coronavirus," Trade Minister Yoo Myung-hee said during a meeting with reporters. "Amid such challenges, the WTO should maintain its full function, regardless of any crisis, to maintain trade."

Yoo added the WTO needs to normalize its role of handling negotiations and settling disputes under a multilateral regime, and that the COVID-19 pandemic gave an opportunity to look at the pending issues.

"The WTO needs to especially rebuild trust in the multilateral trading system by making it more relevant, resilient, and responsive," Yoo said.

"Many countries are disappointed and expressing concerns over the WTO, which has been facing impasses while failing to fulfill its original function," she added.

The remarks came amid criticism that the WTO's role in mediating trade disputes and deadlocks has weakened recently.

"I have extensive experience in working with countries with different levels of economic development throughout my career," Yoo added, saying this would help her better understand the different needs of the member states.

Asked about the trade row between the United States and China, Yoo did not provide a direct statement but reiterated that she will serve all members of the WTO. Yoo added she holds the same stance over the yearlong trade row between South Korea and Japan.

The trade minister, however, pointed out that it is also important for Japan to have a fully functioning WTO, which is one of her top priorities. 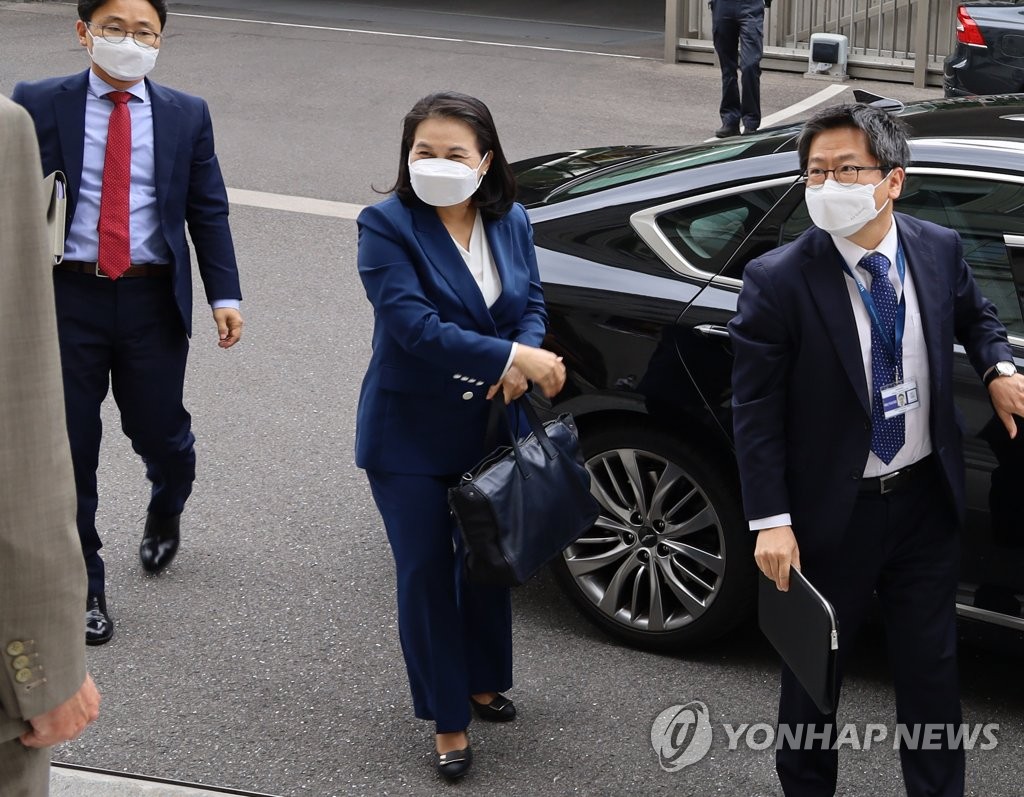 Last week, the WTO's dispute settlement body decided to set up a panel to look into South Korea's complaint against Japan's export restrictions, a month after the decision was put off due to Tokyo's opposition.

In June, South Korea reopened the WTO complaint about Japan's export curbs on key industrial materials, as Tokyo remained unresponsive to Seoul's call for the removal of the export restrictions it imposed one year ago.

The dispute began in July last year, when Japan abruptly announced it would regulate South Korea-bound exports of three materials that are critical for the chip and display industries, the backbone of Asia's No. 4 economy.

Being a veteran negotiator in trade talks, she was appointed as South Korea's trade minister in February last year. Yoo is fluent in English and served as the presidential office's spokesperson for foreign correspondents during the Park Geun-hye administration.

The WTO needs to pick a new leader, as incumbent Director-General Roberto Azevedo of Brazil is set to stand down in August, about a year before his term ends. The organization recently failed to choose an interim leader, as members could not reach a consensus.

The process to pick the new WTO chief will officially begin on Sept. 7 and may take up to two months.