SEOUL, Aug. 6 (Yonhap) -- Korean Air Lines Co., South Korea's biggest airline, said Thursday it has received a deal from a Japanese company to supply an aircraft component for B787 planes through 2030.

Korean Air has obtained a deal estimated at US$299 million to provide the aft wheel well bulkhead component for B787 planes for eight years through 2030 through Kawasaki Heavy Industries Ltd., the company said in a regulatory filing.

The national flag carrier signed the contract with the Japanese company to supply the body part for B787 jets, a company spokesman said.

The deal is an extension of the previous contract Korean Air signed with Kawasaki Heavy in 2005 to supply the same part for B787 planes through 2021, he said.

On top of flight services, Korean Air also manufactures aircraft parts and supplies them to Airbus and U.S. aerospace giant Boeing Co. It began to supply the parts to Boeing and Airbus in 1986 and 1987, respectively. 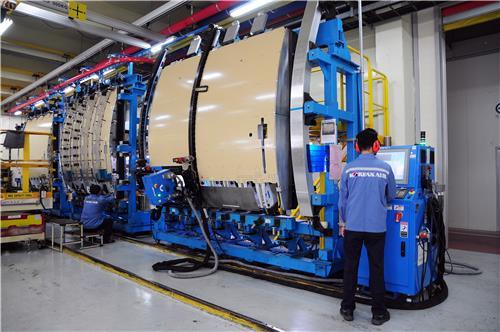 Korean Air wins deal to supply parts for B787s through 2030

Korean Air wins deal to supply parts for B787s through 2030