SEOUL, Aug. 7 (Yonhap) -- The military is trying to detect and remove landmines in border regions that could have been washed away across the border from North Korea due to heavy rains, the defense ministry said Friday.

Front-line military units launched the work earlier in the day amid concerns the mines could have made their way south due to swollen water levels following heavy precipitation since last week, according to the ministry.

"Wooden-boxed landmines from the North do not look like explosives on the surface, so we've been doing this work preemptively to find the mines for the safety of the people and service members," a ministry official said.

The United Nations Command (UNC) said it has approved an "urgent request" from the South Korean government the previous day to access the DMZ for flood mitigation measures.

"This operation was critical for resupply of frontline DMZ units," the U.S.-led command said in a Facebook post, vowing continued support.

The ministry also heightened the level of emergency duty by one notch to the third and the highest one as of 8 a.m. to be fully prepared for heavy downpours, according to the officials.

"As the basic mission of the military is to protect our people's life, property and safety, we need to actively support the suffering residents so that they can promptly return to their ordinary life," the minister said during his visit to a rain-hit village in Anseong, 70 kilometers south of Seoul.

To help civilians recover from damage, around 4,100 troops and 214 military equipment have been mobilized, they said.

Torrential rains that have pounded South Korea's central areas killed 10 people and left 17 others unaccounted for, according to the disaster headquarters. 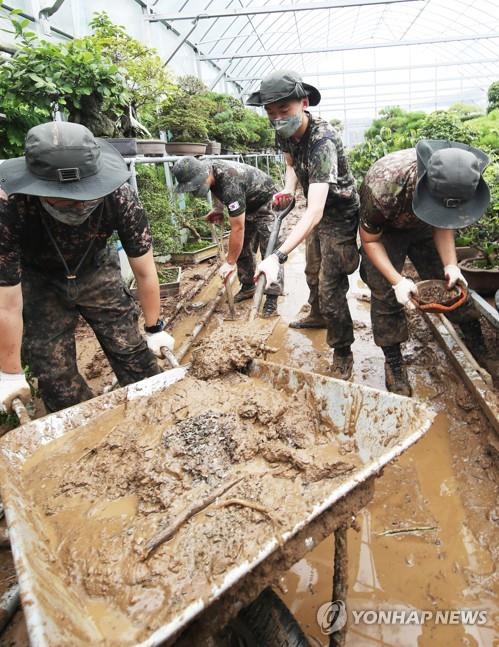