South Korea's daily new virus cases spiked more than 900 in late February, but the COVID-19 curve has since flattened sharply in recent months. The decline in infections has moderated the contraction in domestic demand. 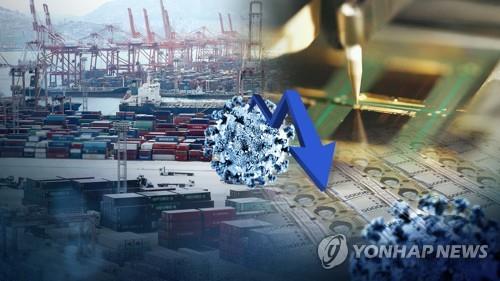 It said internal and external economic sentiments are rebounding, reflecting expectations for a recovery as some consumption-related data improved in major countries.

Still, the institute said the growing number of new COVID-19 cases worldwide and intensifying disputes between the United States and China could pose a constraint to a global economic recovery.

In July, South Korea's exports fell 7 percent on-year to US$42.8 billion, extending their on-year decline to a fifth consecutive month amid the fallout of the new coronavirus, but the pace of decline slowed sharply due to reopening.

July's pace marked a sharp slowdown from the 10.9 percent drop in June and the 23.7 percent decline in May.

Separately, the KDI said 20 South Korean economic experts expect the country's economy to contract 0.9 percent in 2020, down by 0.6 percentage point from the last survey in April.

Next year, the economy is expected to grow 2.8 percent, higher than the previous estimate of 2 percent made in April.

The country's outbound shipments are expected to decline 5.8 percent this year, following last year's decline of more than 10 percent.

South Korea's current account surplus for the year is estimated at $42.5 billion, also lower than April's estimate of $54.2 billion, according to the survey.

The experts surveyed projected that South Korea's benchmark rate will stay at the current record low level of 0.5 percent throughout 2021.