SEOUL, Aug. 7 (Yonhap) -- The ruling party's lead over the main opposition party in public opinion narrowed down to 12 percentage points this week amid growing public discontent over the policy direction of the ruling party, a recent poll showed Friday.

According to the survey by Gallup Korea, conducted on 1,000 people aged 18 or above from Tuesday to Thursday, 37 percent of the respondents expressed support for the Democratic Party (DP), while 25 percent supported the United Future Party (UFP).

The latest poll result widely varied from a similar poll conducted by Realmeter in the same week, which put the DP in a less than 1 percentage point lead over the UFP for the first time. The survey showed the ruling party's support dropped to 35.6 percent, only 0.8 percentage point ahead of the UFP's 34.8 percent.

In the Gallup Korea poll, the UFP saw its public approval rating surge by 5 percentage points to 25 percent this week compared with a week ago. The rating is the highest for the opposition party since the April 15 parliamentary elections.

The corresponding number for the DP fell from 38 percent to 37 percent, the lowest since the elections, where the DP won a landslide victory.

The survey has a confidence level of 95 percent with a margin of sampling error of plus or minus 3.1 percentage points

About 26 percent of the respondents said they did not have a preferred political party.

Gallup said the visibly higher approval rating for the UFP this week may have stemmed from the public's growing "dissatisfaction with the government and the ruling party," rather than any particular performance by the opposition party itself.

The approval rating for President Moon Jae-in came in at 44 percent, the same as a week before. 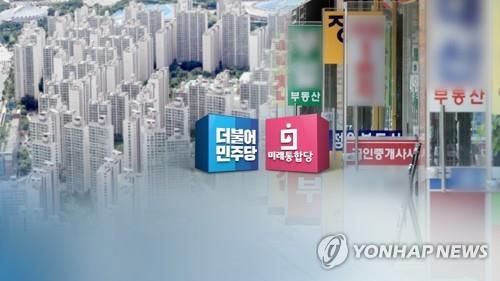