The K League 1 club said former Jeju United coach Jo Sung-hwan will take the helm of the team until the 2021 season. But it did not disclose financial terms of the contract.

"We've sought for an experienced coach who can understand our situation and help us to overcome it," Incheon United said in a statement. "We decided to trust Jo with his longstanding career as a player and coach."

Incheon is dead last in the 12-team competition with five draws and nine losses. They remain the only winless club in the league.

It scored five points as of Friday, eight points behind the 11th-placed Seoul FC.

The worst K League 1 club at the end of the 27-match season will be automatically relegated to the second-tier K League 2 for 2021.

"I will do my best to meet the fans' expectations and support," the new coach was quoted as saying. 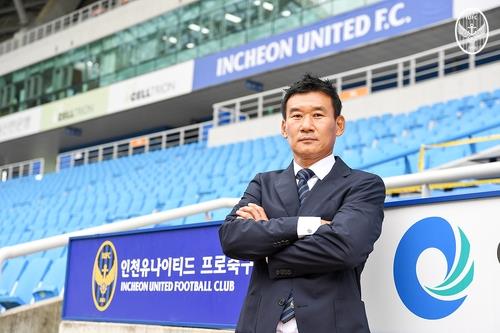 In June, its former coach Lim Wan-sup resigned after nine games. Since then, the team has been looking for a new leader, considering its former head coach Yoo Sang-chul, who left the bench in January due to pancreatic cancer, and ex-Suwon Samsung Blue Wings coach Lee Lim-saeng, who stepped down as the K League 1 club's head coach last month.

Jo, who played at the Yukong Elephants and Bucheon SK in 1990s, took over Jeju in 2015 and led the team to finishing third and second in the K League 1 in 2016 and 2017, respectively. But he stepped down from the post in the middle of the 2019 season after nine winless games.