The landslide buried five homes at a village in Gokseong, about 400 kilometers south of Seoul, at 8:29 p.m. Friday.

A man in his 50s and two women in their 60s and 70s were rescued one hour later but declared dead at a hospital.

Two neighbors were trapped in the debris, and one of them in her 70s was pulled out at 8:15 a.m. Saturday but died at a hospital, county officials said. The last victim in his 70s was found dead at 1:43 p.m.

The two people were discovered after the search resumed early in the morning. Rescue work had been stopped just before midnight due to the danger of further landslides as torrential rain continued.

About 30 residents have been evacuated to a nearby elementary school.

Police are investigating the cause of the incident as some residents claimed that soil piled up on the village hill for road expansion work flowed down. 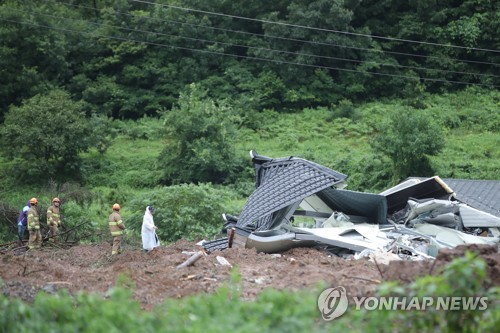 The landslide occurred as torrential rains have wreaked havoc across the country since last Saturday amid the prolonged monsoon season.

The government broadened its highest-level landslide warning across the country except for the southern island of Jeju on Saturday.

The Korea Forest Service on Friday night issued the "serious" warning, the highest on its four-tier scale, for 12 of the nation's 17 metropolises and provinces.

The agency raised the alert level for an additional four areas -- Seoul, Incheon, Gyeonggi Province and Gangwon Province -- to "serious" effective as of noon Saturday. Only Jeju remained under the second-highest warning. 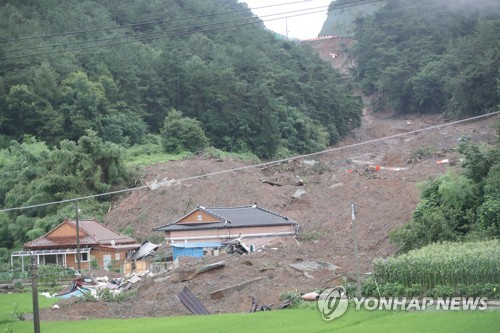