The country's weather agency forecast torrential rains for its southern and central provinces, including the city of Kaesong, the surrounding Hwanghae Provinces and some areas in Kangwon Province, between Sunday and Monday, and issued advisories, according to the North's Korean Central Television.

Hwanghae and Kangwon were the areas in North Korea most affected by heavy rains this week. Nearly 730 homes and 600 hectares of rice fields have been flooded and 179 homes destroyed after a levee broke as heavy rainfall pounded the country for days, the North's Korean Central News Agency (KCNA) reported.

Some areas in Kangwon received more than 800 millimeters of rain, according to the weather agency. The average yearly precipitation in North Korea comes to around 960 mm.

Pak Pong-ju, vice chairman of the State Affairs Commission, visited the flood-stricken Hwanghae area and urged officials to work to protect crops "to fulfill their responsibility and role in protecting the crops from flood, heavy rain and storm," the KCNA reported Saturday.

Pak's visit came on the heels of the inspection by leader Kim Jong-un. During his visit to a damaged Hwanghae village, Kim ordered officials to send his special stock of grain to the victims, and instructed all-out recovery efforts, according to a KCNA report on Friday.

North Korea is vulnerable to natural disasters due to its lack of infrastructure, analysts say.

Another downpour forecast has also put South Korean authorities on alert, as the rain could cause a sudden increase in water levels in the inter-Korean border regions.

Earlier this week, North Korea partially opened the floodgates of Hwanggang Dam on the western border and released water into the Imjin river without prior notice, sending the level of the river to an all-time high. 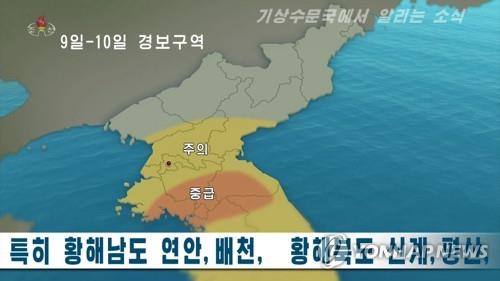