The tropical storm, which formed early Sunday southwest of Okinawa and started to move northeast, is expected to pass waters 350 kilometers south of Jeju Island around 10 a.m. Monday, according to the Korean Meteorological Administration (KMA).

Around 3 p.m. on the same day, it is predicted to arrive in waters 30 km southwest of Busan, some 325 km southeast of Seoul, it said.

South Korean will experience rain over the coming days, while the typhoon will strike the southeastern region of South Gyeongsang Province and Jeju Island, with strong winds and heavy downpours. 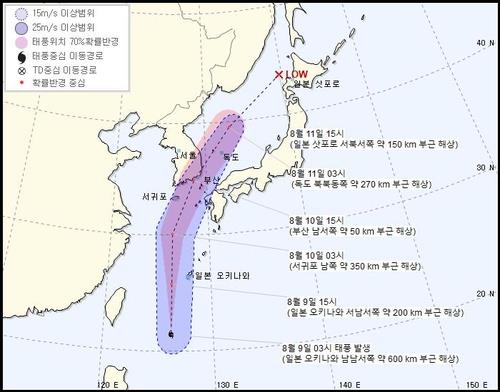 S. Korea to come under direct influence of Typhoon Jangmi from Monday

S. Korea to come under direct influence of Typhoon Jangmi from Monday