SEOUL, Aug. 10 (Yonhap) -- Eight merchants working at Namdaemun Market in central Seoul and at least one family member have tested positive for the new coronavirus, officials said Monday, raising concern about a fresh cluster of pandemic infections at the nation's largest traditional market.

According to municipal officials, eight merchants who belong to the sprawling market's women's fashion shopping mall, called Kennedy Complex, had been found to be infected with COVID-19 as of Sunday afternoon.

The latest cluster of infections appears to be traced to a female Kennedy Complex employee, a resident of Goyang, just northwest of Seoul, who tested positive last Friday, the officials speculated.

Soon after, quarantine authorities conducted coronavirus tests on 20 merchants who were working on the same floor as the Goyang resident, and seven of them produced positive results, they said. 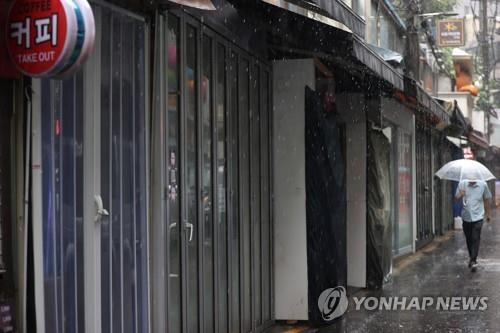 The Goyang woman's child was additionally found to be infected, they added.

The authorities are planning to conduct more COVID-19 tests after examining if there were others who came into contact with the Goyang woman and the infected merchants.

All the infected merchants were working on the ground floor of Kennedy Complex, and there were around five other merchants who work on other floors of the shopping mall, the officials said.

The Seoul metropolitan government has sent out public text massages asking all shoppers who may have recently come into contact with Kennedy Complex merchants to take the coronavirus test.

Kennedy Complex is located between Exit 5 and Exit 6 of Hoehyeon Station on Seoul Subway Line 4. Namdaemun Market is the largest traditional market in Korea with shops selling all kinds of consumer goods, including clothes, glasses, kitchenware, toys, stationery, accessories, ginseng and imported goods.