SEOUL, Aug. 10 (Yonhap) -- The total value of unemployment benefits paid out by the government set a new record for the sixth consecutive month in July, data showed Monday, due largely to the persistent negative economic impact from the coronavirus outbreak.

The amount of state allowances paid to those unemployed or seeking jobs soared to a record high of nearly 1.2 trillion won (US$1.01 billion) last month, according to the Ministry of Employment and Labor.

The ministry said the government paid 1.189 trillion won in allowances to those struggling to find jobs in July, which marked an increase of 56.6 percent from 429.6 billion won paid in the same month last year. 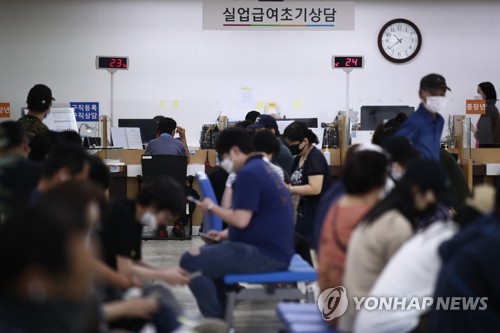 The figure has broken record after record since February, when the COVID-19 pandemic started battering the economy and forcing businesses to fire employees to stay afloat. The job seekers' allowances paid from employment insurance funds include early reemployment incentive allowances and unemployment benefits.

The ministry said a record high of 731,000 people applied for job seekers' allowances in July, with the number of first-time applicants rising 12.9 percent on-year to 114,000. It explained the steep increase in unemployment benefits was attributed to policy changes that include a hike in allowance volume and extension of payment periods.

The ministry said the number of employment insurance subscribers rose to 13.9 million last month, up 1.4 percent, or 185,000, from a year ago.

The monthly growth in new employment insurance subscribers had plummeted to 155,000 in May from around 500,000 a month last year before rebounding to 184,000 in June and marking a further rise last month. The rebound in new insurance subscribers was attributed to the service sector, in which the number rose by 2.5 percent on-year to 9.53 million, the ministry said.

But in the accommodation and restaurant business sector hit badly by the ongoing social distancing campaign, the number of employment insurance subscribers fell by some 2,000. The corresponding subscription number in the manufacturing sector declined 1.8 percent, or 65,000, to 3.52 million, marking the biggest fall since the 1998 financial crisis.

Employment insurance subscribers under 29 and in their 30s also fell 71,000 and 56,000, respectively, illustrating the growing unemployment among young people.