He also proposed a review of ways to alleviate the tax burden of low- to mid-priced single-house owners as part of "complementary" measures.

"The housing problem has become the foremost pending policy task for the people," he said at the outset of his weekly meeting with senior Cheong Wa Dae aides.

He cited the "all-encompassing and unprecedented level" of policy measures, backed by the completion of legislative procedures, to stabilize the market.

"Now, the government will responsibly go ahead with the realization of residential justice," he stressed. "If necessary, (the government) will consider the establishment of a real estate market supervisory agency for the effectiveness of the measures."

His remarks hinted at no change in its major real estate policy direction despite mounting public criticism over the failure to cool the market. 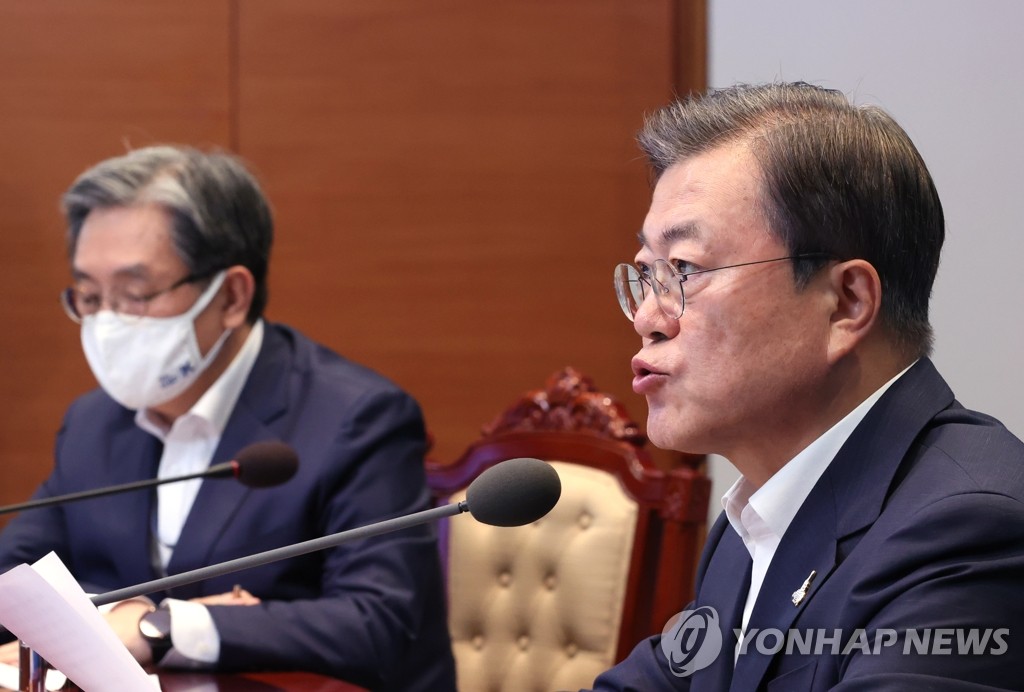 He said a stream of property market regulations including tough mortgage restrictions is aimed at funneling excess liquidity, attributable to ultra-low interest rates and massive fiscal spending, into "productive" sectors.

He also emphasized that houses should be an object for "welfare," not speculative investment.

The left-leaning Moon administration has focused on a fight against property speculation, which is highlighted by legislation on imposing more property ownership taxes on people with two houses or more and raising taxes on capital gains from short-term housing investment.

"It represents a strong commitment to terminating the era of real estate speculation," Moon said.

However, housing prices, rents and down payments, known as jeonse here, have kept soaring largely in Seoul and the nearby capital area, where half of South Korea's 52 million population lives.

Median apartment prices in Seoul have shot up over 50 percent since the launch of the Moon administration in May 2017, according to the Citizens' Coalition for Economic Justice, a civic group based in the capital.

Multiple opinion polls showed that public support for Moon and the ruling Democratic Party has dropped considerably in recent weeks mainly affected by the public discontent with the government's real estate policy.