Finance Minister Hong Nam-ki instructed officials to act swiftly in tapping the reserve fund, which has dwindled to about 2 trillion won (US$1.6 billion), in addition to the existing budget, to provide assistance to those affected by recent heavy downpours.

This year's monsoon season, which began on June 24 in the central region, has shown no signs of letting up. 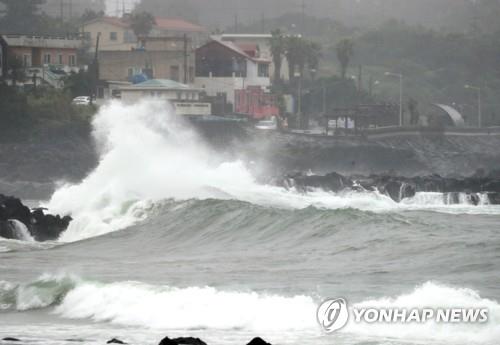 The seasonal rain has left 42 people dead or missing and damaged 14,091 facilities. Nearly 7,000 have been displaced from their homes.

The ruling Democratic Party said it will hold a consultative meeting with the government on Wednesday to discuss whether to draw up a fourth extra budget, in addition to three batches of supplementary budgets aimed at fighting the pandemic-caused economic slowdown, to cope with damage caused by heavy rains.

A ruling party official said a fourth extra budget would be worth less than 3 trillion won (US$2.5 billion).

Also Monday, Hong said the government should seek public understanding over its latest measures meant to curb a further rise in housing prices.

Last week, the government unveiled an unprecedented plan to supply more than 130,000 homes in Seoul and adjacent areas over the next eight years.

The measures follow dozens of previous measures ironed out by the government in the past three years to stabilize the real estate market. But the past measures did not manage to bring rising housing prices under control.