SEOUL, Aug. 10 (Yonhap) -- Heavy rains poured down again on Monday in southern parts of North Korea, including its main agricultural region, which have been already hit hard by recent downpours, its state news agency said.

The Korean Central Television Broadcasting Station reported that as much as 200 millimeters of rain, along with strong winds, pounded parts of Hwanghae and Gangwon provinces.

The network forecast up to 70 mm of more rain to fall overnight, calling on people to be vigilant against flooding.

North Korea is vulnerable to flooding due to poor drainage and decades of deforestation.

The state Korean Central News Agency (KCNA) reported that the second flood warning since Thursday has been issued for Hwanghae, the country's biggest rice-producing region. Days of heavy rains have swelled Yesung Reservoir in Hwanghae to dangerous levels.

Ri Young-nam, vice chief of the country's meteorological service, appeared on TV and warned that rivers in the provinces of Hwanghae and Gangwon could overflow because of continued downpours.

The latest deluge further hampered recovery work in the areas. Unusually heavy rains wreaked havoc on the North last week, flooding farmlands and houses and displacing hundreds of people, according to state media.

On Thursday and Friday, torrential rain of 150-200mm, coupled with thunder and winds, is forecast to hit the province of Pyongan, south of Jagang, South Hamkyong, and inland of Gangwon. 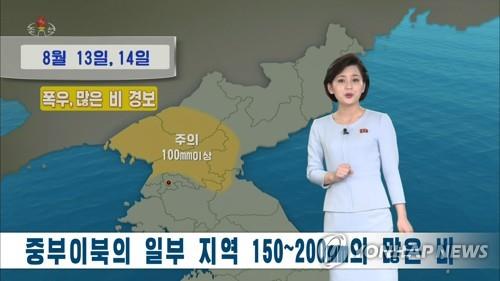