SEJONG, Aug. 11 (Yonhap) -- South Korea posted a record budget deficit in the first half of the year as government spending surged to cushion the fallout from the coronavirus outbreak amid a fall in tax revenue, government data showed Tuesday.

The government's gross revenue came to 226 trillion won (US$191 billion) in the January-June period, down 20.1 trillion won from a year earlier, according to the data from the Ministry of Economy and Finance.

In contrast, government expenditures soared by 31.4 trillion won to 316 trillion won over the cited period, resulting in a shortfall of 90 trillion won.

Excluding four state pension schemes, the government's budget deficit reached a new high of about 111 trillion won in the first half. 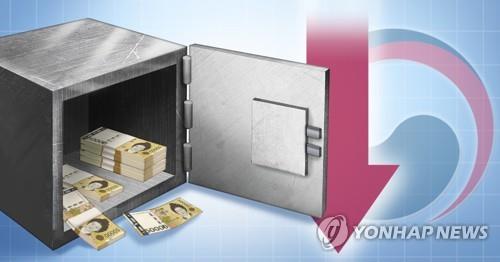 The large first-half budget hole was attributed to a plunge in national tax revenue amid a spike in coronavirus-related spending.

National tax revenue amounted to 132.9 trillion won in the six-month period, down 23.3 trillion won from the same period a year earlier.

Government spending surged in the first half due to cash grants to citizens and extra budgets to cope with the coronavirus fallout, combined with a spike in jobless claims.

In May, the government began providing relief handouts of up to 1 million won to every household to help mitigate the impact of the pandemic, which led to more jobless people.