SEOUL, Aug. 11 (Yonhap) -- South Korea's homegrown streaming media service platforms seem to be losing their competitive edge to global media giant Netflix, which has been rapidly expanding its influence in the country.

Last week, the U.S. over-the-top (OTT) service firm partnered with local telecom operator KT to offer its streaming service on the latter's pay TV platform, Olleh TV, starting from Aug. 3. All Olleh TV subscribers can access Netflix with just a click or a tap on a remote control.

As Netflix has been offering the same connection service to LG Uplus clients since 2018, it now has secured more than a third of South Korea's pay TV subscribers as its potential customers. KT and LG Uplus held a combined 35 percent share of the local pay TV market. 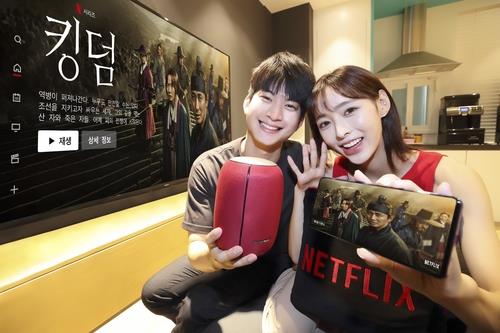 Meanwhile, local OTT service providers led by Wavve, launched by the country's three terrestrial broadcasters last year, and tving, a video-on-demand platform run by media giant CJ ENM, seem to be playing second fiddle to Netflix, which has been on a roll since it entered the South Korean market in 2016.

Last year, Wavve said that it would invest 300 billion won (US$251 million) to create eye-catching original content over the next four years, with 60 billion won to be spent this year.

But Netflix will reportedly funnel an estimated 300 billion won into Korean content production this year alone out of its 2020 budget of $17 billion. It has created a number of Korean original titles, including the zombie thriller "Kingdom" (2019) and the teen romance "Love Alarm" (2019).

The U.S. firm has also joined hands with South Korean content creators like CJ ENM and JTBC to expand its influence in the country's burgeoning streaming service market.

The Association of Korean Buyers and Distributors of Foreign Films, which has 14 importing and distributing firms as members, said Wavve and tving pay them for each film based on the number of total views.

But the OTT platforms calculate the rates for a TV show by total views from all episodes, paying higher loyalties to TV producers than those of films, the association claimed.

Netflix, on the other hand, has addressed the issue by buying the copyright of a film from the beginning.

Against this backdrop, local OTT firms are seeking new alliances to survive the Netflix-led market.

SK Telecom Co., which partially owns OTT platform Wavve, proposed a merger with tving, which has also received a collaboration offer from KT.

Experts said South Korean streaming service providers, whose budget is dwarfed by that of Netflix, have sat on their laurels, satisfied with once popular variety shows and dramas made by the big three broadcasters.

"Netflix's big-budget strategy has played a role in forming the skewed business landscape," culture critic Jeong Duk-hyun said. "It definitely is competitive in discovering quality content, though. But I don't think homegrown OTT services make efforts to keep up with it."