SEOUL, Aug. 11 (Yonhap) -- Several conservative civic groups critical of the Moon Jae-in administration and its policies are to hold large-scale rallies in the heart of Seoul on Saturday, putting police and quarantine officials on alert over the possible spread of the new coronavirus.

The outdoor rallies are expected to draw crowds of up to 10,000 people to major downtown streets leading to the Gwanghwamun square, posing a possible threat to quarantine authorities' efforts to reduce the chance of random transmissions of COVID-19 among citizens.

Saturday is the annual Liberation Day, a national holiday to celebrate the end of Japan's 36-year colonial rule on the Korean Peninsula in 1945. 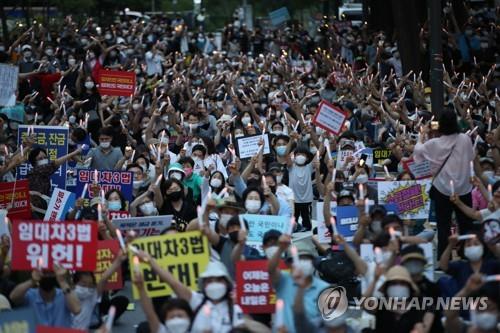 The Seoul metropolitan government banned gatherings in public squares in the city center, including Seoul Plaza and the Gwanghwamun square, in February as part of its anti-coronavirus measures but has imposed few restrictions on rallies held elsewhere.

According to police, two conservative civic groups -- one led by pastor Jeon Gwang-hoon and another named "Freedom Union" -- are planning to organize a joint rally in celebration of the Aug. 15 Liberation Day on Sajikno located between the Gwanghwamun square and Gyeongbok Palace from noon Saturday.

The rally organizers reported to police that some 2,000 people will take part in the Saturday rally set to take place on three lanes of a 300-meter section of Sajikno spanning from Sajik Park and the Jeoksun Hyundai Building.

Other conservative civic groups have also notified police of their separate plans to hold anti-government rallies on Sajikno on the same day. They include a group of activists denouncing the Moon government's real estate policies and heavy property taxes.

Police estimate the rally participants to exceed 2,000, while some conservative groups say the crowd numbers could exceed 10,000 people.

"A crowd of around 2,000 people may not hamper the social distancing campaign, but any crowd number bigger than that could pose a significant threat to quarantine efforts," a police officer said.

In other parts of central and southern Seoul, including near the Bank of Korea building and the Seoul Central District Prosecutors Office in southern Seoul, various other civic groups are planning to organize rallies on Saturday.

All told, seven civic groups have so far reported plans to hold rallies in Seoul on the day with the estimated participation of 42,000 people.

The Seoul government said its officials and police will closely observe if Saturday rally participants observe quarantine rules, such as maintaining two-meter distance from one another, mask wearing, compiling participant lists and restraints on slogan shouting and singing.