SEOUL, Aug. 12 (Yonhap) -- A South Korean civic group's push to barter sugar for North Korean liquors and food products in what would be the first such exchange in a decade is raising both hopes for renewed cross-border engagement and concerns over risks of sanctions violations.

Seoul's unification ministry is weighing whether to approve the plan, as it is eager to bring inter-Korean ties back on track after the North blew up a joint liaison office and cut off communication lines in June in anger over propaganda leaflets flown into its territory.

The plan meshes with Seoul's drive to foster cross-border economic exchanges and trust so as to pave the way for dialogue on harder issues such as security. But uncertainties remain high, particularly over whether the small-scale project would bring a thaw in inter-Korean ties.

In June, a South Korean farmers' group sealed a deal, worth 150 million won (US$126,710), with the North's Kaesong Koryo Insam Trading Co. to bring in ginseng and blueberry liquors, cookies, sweets and other food products in return for 167 tons of sugar.

Brokered by a Chinese firm, the deal was meant to circumvent anti-Pyongyang sanctions prohibiting "bulk cash" transfers to the communist regime. Seoul officials also believe that the products are not subject to sanctions.

If the project is approved, the trade is expected to take place via China, as directly sending to the North cargo trucks, which can potentially be diverted for military purposes, could run the risks of breaching the sanctions regime.

Such a scheme was foreordained, as new Unification Minister Lee In-young pledged to pursue an out-of-the-box approach to overcome sanctions-driven impediments to cross-border exchanges upon his nomination for the post last month. 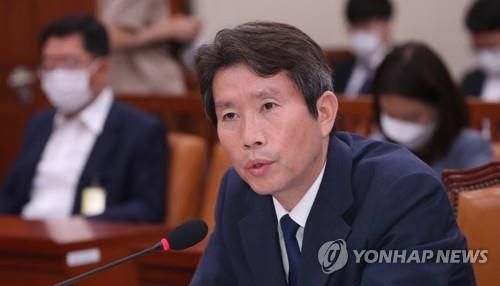 "Sanctions and the bulk cash issue have always worked as direct constraints. We need to tide them over with new imagination," Lee wrote in a document sent to a parliamentary committee for his confirmation hearing last month.

"I hope we can pursue small-scale exchanges and cooperation with the North, starting from the humanitarian domain," he added, floating the idea of bartering rice and medicine from the South for mineral water from Mount Kumgang and Paekdu in the North.

The barter deal, once approved, would put into practice Lee's proposal that reflected a growing sense of urgency within the Seoul government for a return to the cross-border reconciliation process stalled amid a deadlock in nuclear negotiations between Washington and Pyongyang.

Inter-Korean ties were put on a downward trajectory as the North vented anger at South Korean civic groups' sending of anti-North Korean leaflets and took retaliatory steps, such as the surprise detonation of the joint liaison office seen as a key symbol of inter-Korean rapprochement.

Despite the North's hostile acts and bellicose rhetoric, the South has not let up on its peace overtures toward Pyongyang with continued calls for engagement. Just last week, Seoul approved a plan to provide $10 million worth of humanitarian aid to the North through the World Food Programme.

The civic group's push for small trade with the North could be yet another diplomatic feeler to the North, which has been in dire need of outside assistance amid worsening economic woes stemming from efforts to prevent a coronavirus outbreak, crippling sanctions and most recently, torrential rains.

It remains to be seen whether Pyongyang would, after all, welcome Seoul's relentless signals for engagement, as the recalcitrant regime has long indicated what it wants is not meager amounts of aid trickling in from outside but sweeping sanctions relief that would pluck it from the economic backwater.

"Unification Minister Lee has continued to signal that Seoul will double down on its engagement policy, but doubts linger over whether its endeavors would meet its own expectations," Park Won-gon, a professor of international politics at Handong Global University, said.

"Unless the North is given a hugely beneficial advantage, the North may not take any meaningful step toward improvement in cross-border relations or show interest in the barter program at least until the November election in the United States," he added.

The exchange of North Korean alcoholic beverages and other food products for sugar without massive cash transfers to the North may not flout sanctions, but it would need coordination with Washington that has been leading the sanctions regime.

During a trip to Seoul early last month, U.S. Deputy Secretary of State Stephen Biegun threw his government's support behind inter-Korean cooperation, calling it an "important component" in fostering stability on the Korean Peninsula.

On the inter-Korean exchanges, Seoul has been closely coordinating with Washington to avoid any mutual misunderstandings and the possibility of inadvertently violating both global and U.S. stand-alone sanctions.

Yoh Sang-key, the spokesman of the unification ministry, said Monday that the U.S. had shared the understanding over the general tenor of the project. Less than an hour later, Yoh reversed his statement, saying there had not been consultations with the U.S. on the issue yet.

The reversal triggered speculation that it may take more time than expected to forge ahead with the small scale trade program with the North.

Some observers raised the possibility that the barter plan involving a North Korean trading firm could come under U.S. scrutiny if it is linked to any entity Washington has blacklisted for involvement in aiding the regime's nuclear weapons development.

But the barter plan, if followed through on, could send an unequivocal signal to the North that the South is ready to move past the so-called May 24 sanctions against cross-border exchanges, which were imposed in 2010 to punish Pyongyang for its deadly torpedo attack on the corvette Cheonan.