SEOUL, Aug. 11 (Yonhap) -- South Korean shares extended their winning streak on Tuesday to a seventh day to end at a more than two-year high, aided by tech gains in market heavyweights amid economic rebound hopes. The Korean won stayed unchanged against the U.S. dollar.

The index topped the 2,410-level for the time since June 14, 2018, extending its winning streak to a seventh session. 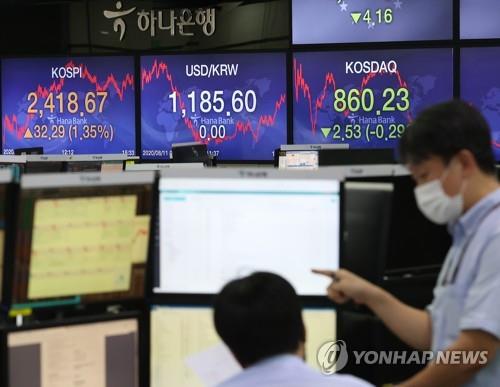 The rally was led by gains in techs and chemicals, on the back of economic rebound hopes, analysts said.

"Investor sentiment has run high, largely on better-than-expected earnings in the first half and expectations for a profit rebound for next year," Kang Bong-joo, a researcher at Meritz Securities, said.

Kang attributed the KOSPI's rally to the relatively low incidence of COVID-19 infections in South Korea.

The Organization for Economic Cooperation and Development (OECD) expected Asia's fourth largest economy to shrink 0.8 percent in 2020 from a year earlier, far slower than the previous estimate of a 1.2 percent contraction, citing its successful response to the coronavirus pandemic.

The local currency closed at 1,185.60 won against the U.S. dollar, remaining flat from the previous session's close.

Bond prices, which move inversely to yields, closed higher. The yield on three-year Treasurys lost 1.2 basis points to 0.818 percent, and the return on the benchmark five-year government bond fell 1.8 basis points to 1.077 percent.