SEOUL, Aug. 11 (Yonhap) -- A ninth merchant at Seoul's Namdaemun Market has tested positive for the coronavirus, officials said Tuesday, indicating that the cluster infections from the nation's largest traditional market may be spreading.

According to municipal officials, one merchant working at the Jungang Shopping Center, one of the largest shopping complexes within Namdaemun Market, was found to be infected with COVID-19 Monday.

The Jungang Shopping Center is located near women's fashion shopping mall Kenedy, which has reported infections of eight merchants. 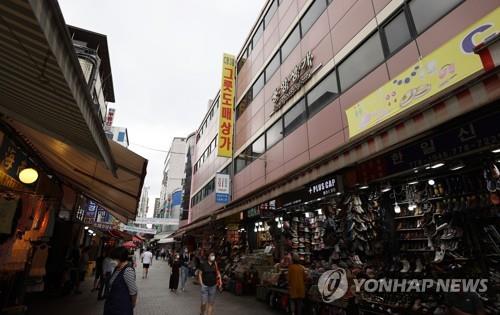 The outbreak at Kenedy appears to be traced to a female employee, a resident of Goyang, just northwest of Seoul, who tested positive last Thursday, officials said, noting she may have contracted the disease from a neighborhood church.

The infected Jungang merchant (Seoul Patient No. 1693) was found to have had dinner with one of the infected Kenedy merchants on July 30, officials said, speculating that the transmission probably occurred during their dinner meeting.

Municipal quarantine authorities are on edge, because as many as 566 merchants operate at the Jungang Shopping Center's Building C, where Seoul Patient No. 1693 was working. The shopping center consists of three buildings, named A, B and C. The patient continued to work at Building C without displaying any symptoms after his July 30 dinner, the officials noted.

Authorities are currently categorizing the confirmed cases from Namdaemun Market as church-linked infections. They say that the virus likely spread from a Goyang church to the Seoul market through the Kenedy employee who was first confirmed to carry the virus.

The total number of cases traced to the Goyang church rose to 33 as of Tuesday, according to the Korea Centers for Disease Control and Prevention (KCDC).

Quarantine authorities asked anybody who visited the Jungang Shopping Center last Friday or Saturday and show suspected coronavirus symptoms to take a coronavirus test. They have set up a makeshift testing facility within Namdaemun Market and administered tests on 215 merchants and shoppers so far. Of them, 205 people produced negative results and the others are awaiting test results.

The number of coronavirus cases in Seoul rose by six in a day to reach 1,694 as of Tuesday morning.

Nationwide, South Korea identified an additional 34 virus cases, including 23 domestic infections, raising the total caseload to 14,660, according to KCDC.